Review: It's Everything All At Once in 'Doctor Strange in the Multiverse of Madness' 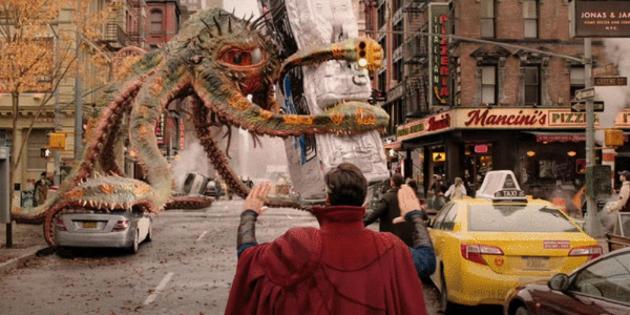 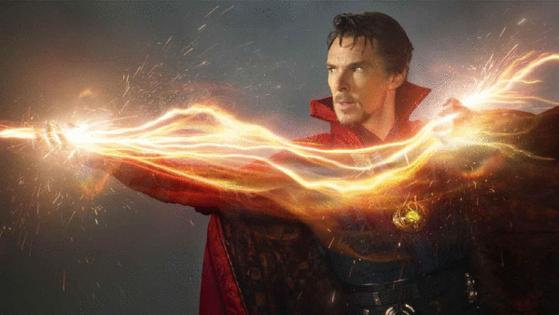 Arriving less than five months after "Spider-Man: No Way Home," the new "Doctor Strange in the Multiverse of Madness" is a bit of a fizzle. "No Way Home" was one of the most soulful and technically impressive films in the 14-year history of the Marvel Cinematic Universe, a picture distinguished by the clarity of its storytelling, the clamoring brilliance of its computer animation and its especially moving attention to the subjects of love and loneliness.

"Multiverse" has few of those things. Its story is, virtually by design, a jumble. The multiverse concept, which stipulates that everything everywhere is happening all at once (so to speak), drains individual plot elements of significance. It worked better in "No Way Home," where the interactions of the three different Spider-Men were key to the tale being told; here, the endless twists and turns (like the colorful but pointless visit to an alternative New York filled with flowers) grow tiring -- a procession of one damn thing after another, and so what. As for love and loneliness, Doctor Strange himself (played again by Benedict Cumberbatch, now with streaks of gray at his temples) is still sad about the loss of his ex-girlfriend Christine Palmer (Rachel McAdams), whom he alienated with the arrogance of his world's-greatest-surgeon routine. So, love's not really much on the menu here. (Although product placement is: Strange is seen to own a $23,000 Jaeger-LeCoultre watch in the film, while back in our world Cumberbatch is the celebrity face of a new Jaeger advertising campaign.)

The movie lets you know what lies in store right at the beginning, when Doctor Strange bursts onto the screen in a storm of surprisingly unsurprising CGI. (You might expect more FX snazz in a movie with a super-duper Marvel budget, but then the silly fire circles that the Doctor customarily flings around, which look like wreaths of party sparklers, have always been subpar wonderments as well.)

Strange is accompanied this time out by a young woman named America Chavez (Xochitl Gomez, of "The Baby-Sitters Club"), who has the ability to travel all around the multiverse -- from one universe to the next -- unimpeded. Yeah, it's crazy. Strange's pal Wong (Benedict Wong), the Kathmandu sorcerer, is likewise wowed. And of course, there are others who would love to have this power, too -- among them Wanda Maximoff, the celebrated Avenger known professionally as the Scarlet Witch (Elizabeth Olsen).

Here it should be noted that a familiarity with "WandaVision," the Disney+ series in which Wanda features, would be helpful in fully getting down with this picture. A Disney+ subscription will only set you back about $100 a year, so you might want to get on that pronto, before the next Marvel movie arrives.

Along with top-shelf production design and acres of action, the picture also has a number of cameo appearances by well-known actors who are on hand to provide fan service (some of them playing members of a not especially charismatic superhero team I'd hoped never to hear mentioned again). Another of these guesting thespians is B-movie god Bruce Campbell, whose casting is surely the work of director Sam Raimi, a man with major Marvel cred. Raimi directed three mostly well-received Spider-Man films in the early aughts, and of course the "Evil Dead" movies (in which Campbell starred) back in the '80s. He has brought some tangy low-budget-style horror flourishes with him to this film (note the guy with the chewed-off cheek, and the big rubbery eyeball monster). We should all be grateful.

Somewhere in the future a woman named Sarah is informed that she has a terminal disease. "What are my chances?" she asks a doctor, poking around for an ember of hope. "Zero," the doctor says. "Life has thrown you a ...Read More

Why do we love Nicolas Cage? How could we not? Like the protagonist of "Drive Angry," one of his many bad-or-at-least-baddish latter-day movies (it's the one in which he survives an encounter with Amber Heard), Nic has ...Read More