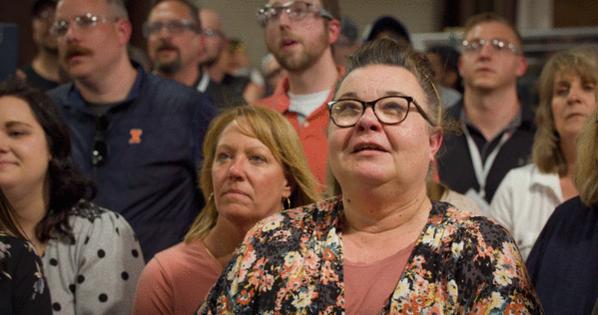 When private equity firm KKR announced the $3 billion sale Monday of C.H.I. Overhead Doors to steel company Nucor, it created a windfall for hundreds of hourly workers at the plant in tiny Arthur, Illinois, who will receive between $20,000 and $800,000 each when the transaction closes.

The deal represents a huge return on investment for KKR, which bought the garage door manufacturer for $600 million in 2015. For employees, who were vested with equity in the company at no charge, the sale is potentially life-changing.

“I had no idea that was going to be this big of a deal,” said Rhonda Jamison, 60, office manager at C.H.I. Overhead Doors.

Jamison, a 17-year veteran of the garage door company, learned about the sale and her six-figure payout at an all-employee meeting last week. The payouts vary based on seniority and salary, with some long-tenured truck drivers — the highest-paid hourly workers — hauling home upward of $800,000 from the sale.

More than 630 hourly workers and truck drivers will receive an average of $180,000 through the sale, the company said.

Located in Arthur, a village of about 2,100 residents south of Champaign, Illinois, the 41-year-old company makes garage doors for commercial and residential use. When KKR bought the company in 2015, it allowed all 800 workers — including salaried employees — to participate in the stock ownership plan as a free benefit.

Employees who earned more than $100,000 per year were also allowed to invest their own money into the stock plan.

The program has been rolled out by New York-based KKR at 25 companies in its portfolio since 2011. The garage door manufacturer, which generated KKR’s highest return on investment in more than 30 years, proved the value of the equity plan for both ownership and employees.

“We do it because obviously it’s good for the workers,” said Pete Stavros, 47, co-head of private equity at KKR and chairman of C.H.I. Overhead Doors. “And it turns out, it’s also smart business. It leads to a more engaged, stable, financially resilient, less likely to quit workforce, which yields better outcomes for companies and investors.”

Stavros, an Arlington Heights native whose dad was a union road grader with a Chicago construction company, developed the model for vesting hourly employees with equity ownership at no cost. In addition to an ownership stake, employees were allocated $1 million per year for enhancing the factory, investing in everything from air conditioning to new break rooms and a cafeteria.