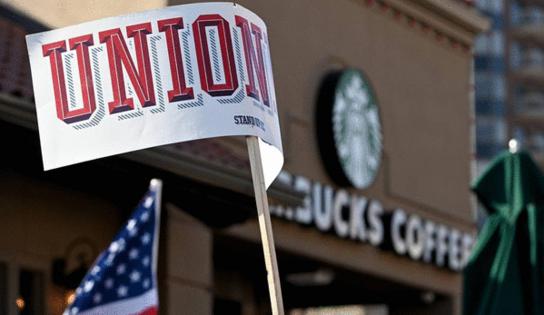 Starbucks has been charged with unfair labor practices at two Kansas City area locations where managers allegedly threatened and fired employees engaged in efforts to unionize.

Six complaints lodged by employees at the Starbucks stores at 302 Nichols Road in Kansas City, and 10201 W. 75th Street in Overland Park, are outlined in a May 11 complaint issued by the National Labor Relations Board.

Employees at the two stores publicly launched their support for a union in March as efforts across the country have gained momentum.

According to the NLRB, a manager at the Overland Park location promised employees better benefits if they refrained from union organizing. A different manager threatened employees who supported a union with stricter enforcement of company policies. They also made threats about wages, promotions and health benefits, the NLRB said.

At the Plaza location, employees faced stricter dress code enforcement as a result of their union activity and were threatened with a loss of future raises and benefits, according to the complaint.

Three employees were allegedly fired for the involvement with union organizing, the NLRB said.

Starbucks has not responded to a request for comment.

Last month, The Star spoke to two of those employees, who expressed anger at the situation.

Alydia Claypool had worked for Starbucks since May 2017. She planned to take advantage of the college tuition aid offered by the company to get her teaching degree. It was “devastating,” she said, to have that opportunity taken away.

The labor board alleges Starbucks violated the National Labor Relations Act, which guarantees workers’ rights to form a union and protects them against retaliation.

The complaint requested remedies including manager training, damages for the three fired employees and other actions.

Dozens of complaints have been filed against Starbucks as organizing efforts across the country have spread since December, when stores in Buffalo were the first in the country to vote to unionize. More than 250 stores have filed petitions to hold union elections, the Associated Press reported last week.

A hearing on the case is scheduled for July 5 before an administrative law judge.