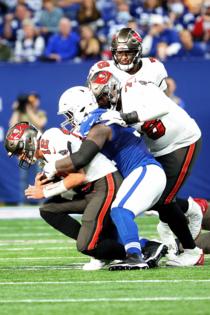 For the fourth time this season, Tom Brady and the Bucs offense needed to win a game on their final possession or run all the time off the clock to protect a lead.

They did it in the NFL opener when trailing by one, driving down the field to set up Ryan Succop’s 36-yard field goal in a 31-29 win over the Cowboys.

They did it in Week 4, when Brady led a drive for Succop’s game-winner from 48 yards with just under two minutes remaining to hold on to win 19-17 at New England.

They did it Oct. 14, holding a 28-22 lead at Philadelphia, then using the final 5:54 on the clock with a clutch drive that ended with Brady taking a knee twice from the Eagles’ 9-yard line.

And they did it Sunday, tied 31-all with the Colts before using their closer ― running back Leonard Fournette ― to drive 75 yards for the winning touchdown with 20 seconds remaining in the game.

“That’s been our M.O. forever,” Bucs coach Bruce Arians said Monday. “Same way in Arizona. Same way when we had Andrew Luck in his rookie year (at Indianapolis) and won about six games in the last two minutes. ... We take a lot of pride in being a really, really, good finishing team whether it’s with the lead or having to go score to win a game. ...

“Situational football, especially two-minute, is critical and four-minute offense is the same. When you have quarterbacks like I’ve been fortunate enough to be around that can will themselves on the rest of their teammates, it makes it a lot of fun.”

The Bucs made the decision to return 22 starters from their Super Bowl 55 championship team, many of them aging veterans in their 30s.