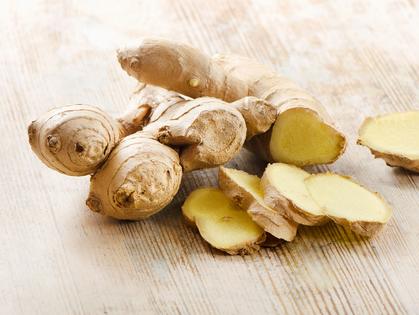 Ginger, so familiar for its comforting aroma, pungent flavor and medicinal value, has assimilated itself into cultures around the world. Gingerbread cookies during the holidays, palate-cleansing slivers of pickled ginger with sushi or a stomach-soothing draught of ginger ale, the ginger root has been cultivated and coveted longer than history has been recorded. This Indian native plant has historically been in very high demand -- and very expensive. Fortunately, ginger is now affordable, readily accessible, and research has revealed its many health benefits -- another reason it's popular as ever today.

Ginger's gnarled and tuberous appearance is no indication of the goodness beneath its thick and woody exterior. In the same family as turmeric and cardamom, this rhizome (underground stem) of the ginger plant (Zingiber officinale) may have a yellow, white or reddish flesh under a thick or sometimes thin brown skin, depending on variety and age at harvest. Ginger is sold fresh, dried as a powdered spice as well as crystallized, candied and pickled. Fresh ginger is dense and fibrous, with a robust, spicy, often hot taste, and it contains higher levels of antioxidants known as gingerols, known for their powerful anti-inflammatory effect.

Traditionally, ginger has been used to treat myriad human ailments, including colds, fever, nausea, and arthritis. Today, the research supports ginger's use for motion sickness, and relief of nausea and vomiting during pregnancy. Research also shows ginger's potential in preventing chemotherapy-induced nausea and vomiting. Evidence indicates specific plant chemicals in ginger, which include gingerols, are responsible for its antioxidant, anti-inflammatory and gastro-protective activities. Daily raw ginger supplementation reduced exercise-induced pain by 25 percent after 11 days, according to a study in a 2010 issue of the Journal of Pain. Its anti-inflammatory effects are also being studied in cancer prevention. A study in a 2013 issue of Cancer Prevention Research found ginger root supplements reduced inflammation markers that were a precursor to colon cancer in the colon in four weeks. Another study in the same journal's April 2013 issue suggests that ginger may reduce the spread of cancer cells and increase the death of cancer cells in people at high risk of colorectal cancer.

Fresh is best when buying ginger. Look for a root that is smooth -- not wrinkly -- and firm. Mature ginger, which is most common, needs to be peeled, while young ginger, found in Asian markets, does not. Store it unpeeled in the refrigerator about three weeks, or freeze up to six months. Powdered ginger also stores best, up to a year, refrigerated. Once peeled, try adding grated, minced, julienned or thinly sliced ginger to marinades for meat, poultry, fish or soy proteins, or add to stir fries, soups, salads and baked goods. The later ginger is added in the cooking process, the more pronounced its flavor and aroma.

This rich and creamy chili comes together in a flash thanks to quick-cooking chicken thighs and canned white beans. Mashing some of the beans acts as a fast thickener when your soups don’t have a long time to simmer. ...Read More

Enjoyed and coveted for thousands of years, ...Read More

Potato roses are thinly sliced potatoes that are soaked, seasoned, and formed into roses in a muffin tin. They’re a sweet way to show someone (or yourself) that you care, to demonstrate your artistic prowess, or to just ...Read More

These warm apple muffins, kissed with cinnamon-sugar, are the coziest breakfast to wake up to in the morning. Unlike dense, super-sweet muffins that taste more like dessert, these muffins are fluffy and just lightly ...Read More

Did you notice? Yes, the days are getting shorter, the nights longer and the temperature is dipping. Just in time comes a simple recipe for classic French pot roast to enjoy on a chilly night. Like our American pot roast, ...Read More

Kary Osmond will not file a recipe for the 10/11/21 Entree package.