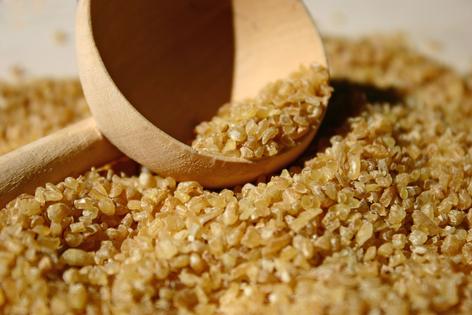 Indigenous to the Mediterranean region, bulgur has been an integral part of Middle Eastern cuisine for thousands of years. Biblical references, in which it is referred to as arisah, meaning "first of the coarse meal," indicate it was prepared by the Babylonians, Hittites and Hebrews 4,000 years ago, and by the Romans, Arabs and Egyptians as early as 1,000 B.C. This staple was declared one of five sacred crops, along with rice, millet, barley and soybeans, by the Chinese Emperor in 2,800 B.C.

Bulgur (Triticum spp.) is cracked wheat that has been parboiled, dried and broken into granules of varying sizes. Some small Middle Eastern villages still retain the ancient preparation of boiling large pots of wheat for days, spreading it on rooftops to sun dry, and then cracking the kernels into coarse pieces before sieving them into different sizes for various uses. Though most often made from durum wheat, any wheat can be made into bulgur. Bulgur, a whole grain, has all the associated benefits, such as healthy weight and gastrointestinal health, due to its rich nutrient profile. A one-cup serving provides 33 percent Daily Value of dietary fiber, along with 15 percent DV of magnesium and 55 percent DV of manganese, two important minerals for healthy bones. In addition, bulgur contains a host of health-protective phytochemicals concentrated in the bran and germ, which include lignans, phytosterols, phenolic acids and flavonoids.

Current scientific evidence, reported in the May 2011 Journal of Nutrition, indicates that whole grains are important in lowering the risk of chronic diseases, such as coronary heart disease, diabetes and cancer. A study published in the August 2007 journal PLoS Medicine is one of several studies supporting increased whole grain consumption for the prevention of type 2 diabetes, and bulgur, specifically, has been found to produce a low glycemic response among people with diabetes. More recent evidence, published in the May 2011 British Journal of Nutrition and the November 2010 American Journal of Clinical Nutrition, showed that a diet which includes more whole grains offers health benefits by improving biomarkers of cardiovascular disease.

Available prepackaged and in bulk bins, bulgur stores well for about six months in a tightly sealed, refrigerated container, such as a glass jar (to prevent rancidity.) Many different grinds of this nutty tasting grain are available, from coarse to fine. Coarse grinds take longest to cook, making them suited to stuffings, pilafs, artisan breads and casseroles. Medium and finer grinds work well in cereals, side dishes, and salads, including tabouleh, its best known use. Bulgur cooks quickly and is as versatile as rice, interchangeable in most recipes.

LOS ANGELES — Rounds of sliced-thin, pink, white-speckled mortadella are popping up on sandwiches, on charcuterie plates and even in the occasional cocktail in Los Angeles, but it's hard to view any food item depicted in...Read More

To do your best in an endurance event, such as the Pittsburgh Marathon on May 7, you have to put in the work with ever-longer training runs to build a mileage base.

Proper warmups and cooldowns also are important to ...Read More

BALTIMORE — Scott Lanphear wasn’t expecting much of a reaction when he fired off a Facebook post earlier this month about the nonalcoholic cocktails available at Patterson Public House.

“It was a spur-of-the-moment ...Read More

Is there anything more satisfying than a wrap?

For starters, they're super easy to make. Second, they can be customized with just about any protein or veggie, or combination of the two, making for a nutritious meal. Third...Read More

Two Minnesota companies join forces to make the beer that will be the hit of your game-day gatherings.

The first thing you notice about the beer is its scent. Not earthy hops, not caramelly malt — chili.

CHICAGO — Before I was a food critic for the Chicago Tribune, I spent 15 years writing, cooking and, most importantly, eating as much as I could. To review a restaurant these days, I visit multiple times, read any books ...Read More