Firecracker hot dogs are perfect for your holiday menu 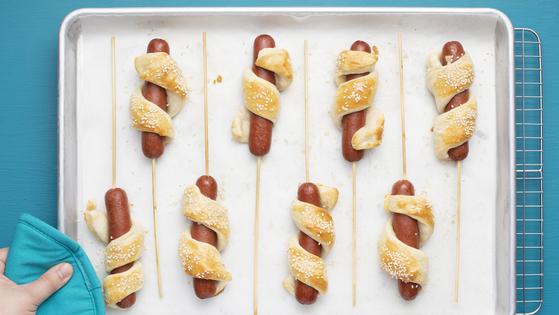 Today we celebrate Independence Day with fireworks, parades and barbecues, where we serve classic “American” foods such as hot dogs, burgers and potato salad. Instead of simply grilling your dogs and slapping them on a bun this year, grab the kids and try this baking method that results in a big bite that one of our young recipe testers couldn’t have loved more, saying, “It’s like a piggy in a blanket, but Hulk-size!”

This pretty, simple snack cake is a perfect way to use fresh summer produce! It’s also great for after school (or even for breakfast, if you’re in need of a special morning treat). The blueberries and raspberries add ...Read More

Generations of kids and grown-ups have baked and eaten chocolate chip cookies.

We have just one person to thank for the chocolate chip cookies we know and love: Ruth Wakefield. In the 1930s, Ruth and her husband ran a ...Read More

Did you know the classic brand of these frosted hand pies — Pop Tarts — are more than 50 years old? The original Pop Tarts’ claim to fame was that they contained fruit filling but did not have to be refrigerated. ...Read More

Pancakes are a blank canvas, so bring out your inner artist. You can work your magic at the table with maple syrup, honey, confectioners’ sugar, fresh fruit and/or softened butter. Or you can cook your artistry right ...Read More