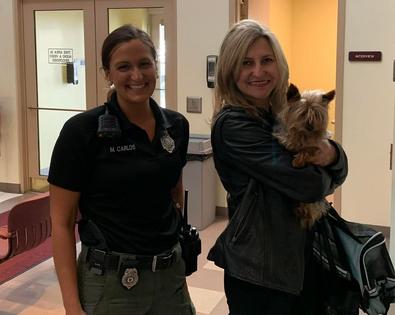 The Stoughton Police Department said in a Facebook post that Animal Control Officer Michelle Carlos was called out on a report of a Yorkshire terrier running loose and she arrived to find the dog appeared to have "not been taken care of."

The Yorkie was scanned for a microchip and he was identified as Rex, a canine belonging to Marzena Niejadlik of Boston.

Niejadlik said she had bought Rex as a puppy for her family after her brother's death.

"We were all devastated, and I was thinking a dog would bring some cure to my family, especially my mom," Marzena told CBS Boston. He snuck out between the legs when someone was leaving the house for a moment and we had a witness that someone pulled over and took him from the street.

Marzena rushed to the Stoughton Police Department and was reunited with Rex for the first time in 11 years.

"Marzena reports that Rex had a great night at their home and loved meeting her kids," the police department said. He was treated to a day of beauty and all is right in world.

The department said the reunion should serve as a reminder to pet owners about the importance of microchipping.

(UPI) Authorities in Colorado said a suspected pack of wolves caught on camera in unclear footage this week turned out to be five St. Bernard dogs who had escaped from their owner's home.

(UPI) Animal control officers in New Jersey responded to an unusual call when a dog squeezed out between an air conditioner and a window frame and ended up stranded on the roof of a home.

CARMEL, Calif. – When Tom Radcliffe owned three Carmel-area pet stores, customers would often complain about how finicky their cats were. “They’d say, ‘My cat doesn’t like tuna, my cat doesn’t like chicken,'”...Read More