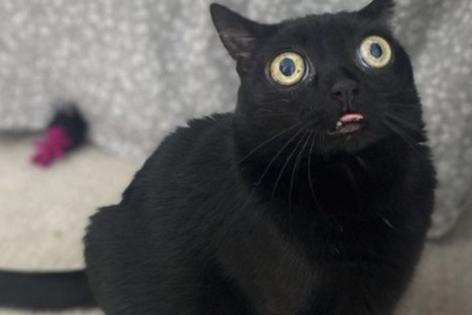 (UPI) A cat who became famous on social media for her unusually large eyes and feet is set to become the first non-human to serve a day as mayor of Hell, Mich.

The town of Hell, which offers anyone the chance to serve as mayor for one day for $100, agreed to allow Jinx the cat to become the town's first animal mayor.

"I made a joke on Twitter saying, imagine Jinx will run for President. I had also seen animal mayors before and I sent a tweet out asking how to make Jinx mayor and someone mentioned Michigan and that you could pay to be mayor of Hell for a day," Mia told MLive.com

Mia adopted Jinx three years ago after finding the kitten in her back yard.

"I rescued Jinx in 2018 and I wasn't even looking for a cat," Mia said. I came home early from a football game. I was supposed to be home much later. I heard meowing in my backyard and discovered her. She was super tiny, only about 3 weeks old.

She soon noticed the cat was unusual.

"She had big eyes and as she grew bigger, her eyes didn't get smaller and I also noticed she had big feet. She doesn't have a condition and the vet says she's healthy. She just has these birth defects. She's also not as agile as most cats and is a little clumsy. She only learned how to land on her feet a year ago," Mia said.

Jinx will be sworn in as mayor virtually on April 24. She will serve as mayor for the day, ending with a call from Reverend Vonn, the town's "Minister of Hell," informing her of her impeachment.

"We love our in-person and distant mayors," Reverend Vonn said. Our Mayor of the Day package is the perfect gift for those who are hard to buy for and/or have everything. They get to have one Helluva fun day and at the end of it, will receive the dreaded phone call to be impeached.

(UPI) Firefighters in North Carolina came to the rescue of a kitten found in an unusual situation with its head stuck in a tire rim.

(UPI) Firefighters responded to a Walmart store in Tennessee to rescue a kitten heard mewing from inside a Pepsi vending machine.

The City of Morristown said in a Facebook post that employees at the Morristown Walmart ...Read More

The Fairfax County Fire and Rescue Department said in a Facebook post that the B-Shift crew from Tower ...Read More

(UPI) Animal control officials in Michigan said a 6-week-old kitten is recovering after spending days trapped in a storm drain.

Fireworks shows are a summer staple, especially on and around the Fourth of July, but they can also be a source of anxiety for pets and their owners.

In addition to the fireworks themselves posing a potential danger to ...Read More