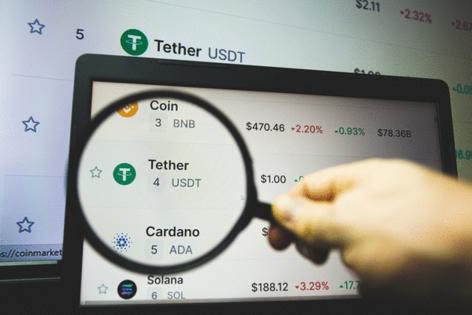 Some stablecoins are backed by assets like Treasury bills and short-term corporate IOUs — key elements of the dollar funding markets — and the concern is that if redemptions are big enough they could spark problems in the markets for these underlying assets.

Yet for now signs of disturbance appear minimal even as Tether — the largest stablecoin used in cryptocurrency markets to facilitate trading, saw its market value drop below the par level it’s meant to be pegged at. This so-called breaking of the buck followed sharply on the heels of an implosion in TerraUSD — another stablecoin — and a rout in cryptocurrency assets.

There has been some apparent dislocation in the pricing of some very short-term bills that may be related, putting yields on some securities out of line with broader curve moves, but no indication of any general contagion beyond the general impact of recent crypto-asset ructions on global risk markets.

Barclays Plc strategist Joseph Abate reckons redemptions in Tether, for example, are only likely to cause notable strains in traditional money markets if they climb beyond half of the stablecoin’s total holdings.

One reason for that is that Treasury bills are likely to constitute most of the initial liquidation and there is already a supply-demand balance within these markets that means any extra assets should be mopped up relatively easily. It’s only if the redemptions start affecting Tether’s commercial paper holdings and certificates of deposit that they’re likely to really roil things, in his view.

“In a run, Tether might be forced to fire-sell its holdings in order to meet redemptions,” Abate wrote in a note to clients Thursday. “Money market investors are nervous that if Tether is pushed to sell its CP and CD holdings, these normally illiquid markets could lock up, as they did in March 2020.”

Yet while Tether has broken the buck, Abate reckons these kind of concerns about money-market assets “may be somewhat premature.”

“There is plenty of appetite for Tether’s bills should it need to sell them,” Abate wrote in a note to clients Thursday. “Strains in traditional money markets might emerge only if Tether’s redemptions exceed 50%, and these might be limited to the small market for lower-tier CP.”

Treasury Secretary Janet Yellen, speaking on Thursday to a committee of lawmakers in the wake of the recent turmoil involving TerraUSD, said that stablecoin risks are not yet big enough to present a “real threat to financial stability, but they’re growing very rapidly and they present the same kind of risks that we have known for centuries in connection with bank runs.”

JPMorgan Chase & Co. analysts including Teresa Ho said they doubted there would be a lot of follow-on impact for traditional funding markets due to the stability of other stablecoins and money-market funds as well as continued demand for both rates and credit products. The bigger impact, in their view, is likely to be how the “seemingly idiosyncratic” episode around TerraUSD might affect stablecoin regulations going forward.

The price of Tether, the largest of the stablecoins used in cryptocurrency markets to facilitate trading, slipped as low as 94.55 cents from its intended one-to-one peg to the dollar on Thursday before recovering to par, Bloomberg-compiled data show. Officials said in a statement they had honored more than $300 million redemptions and processing more than $2 billion “without issue.”

Yields on the very shortest US Treasury bills — in particular those coming due in the next week or so — have shot up over the last couple of days, out of proportion with changes in the broader T-bill curve, which may be related to the recent turmoil around stablecoins.

Yet Tether — which disclosed that it was holding about $35 billion of bills as of end-2021 — would be unlikely to cause “much of a ripple” in the market even if it had to dump the lot very quickly, because daily trading averages of about $150 billion and weekly auction sizes are both larger, according to Abate.

Still, there are still a few unknowns for funding-market participants. For starters, Tether updates its portfolio holdings quarterly, which for a portfolio of short-maturity assets reduces the amount of insight investors have about its liquidity risk, according to Abate. It is as yet unclear whether this bout of unease represents a flight from stablecoins, or within stablecoins, and that too could affect how the movements play out in more traditional funding markets.

t's a perfect storm for the stock market this year: geopolitical turmoil, high inflation, and higher interest rates in 2022.

And that's driven out many market newcomers, including "meme" stock investors, whose holdings ...Read More

Q: I am a remarried widow and live with my husband. I bought our home before our marriage, and only my name is on the deed and mortgage. We agreed to leave the property to my three sons from my first marriage, who would ...Read More

California could soon help first-time home buyers with their down payments and mortgage costs under a proposed $1-billion program to make homeownership more financially feasible for low- and middle-income residents.

Bitcoin extended losses, dropping below $30,000 for the first time since July 2021, putting its decline from a November record high to more than 55% amid a global flight from riskier investments.