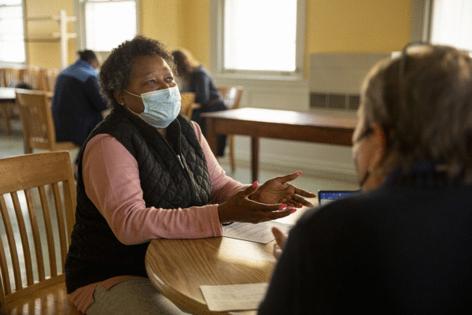 PHILADELPHIA — Tyrone Seldon inherited a house from his father, who died in 2018. Since then, he and his wife, Shawn, have been trying to navigate stacks of paperwork to handle the estate on their own, because they can't afford a lawyer. They got the answers they needed in the social room of a Quaker meetinghouse in the Germantown area of Philadelphia.

"I feel like a weight is lifted off our shoulders," Shawn said.

On a sunny Saturday morning this month, a handful of Germantown homeowners found solutions both to problems they had been struggling with for years and problems they didn't know they had.

Members of Green Street Monthly Meeting of Friends and the nonprofit legal services agency Philadelphia VIP are helping Black Germantown homeowners create wills, understand their deeds, and get help with tangled titles to help them keep their homes — for free. They referred Tyrone Seldon, a 54-year-old systems engineer, to a program that provides free legal help to clear legal ownership, or title, of properties. He also started the process of creating a will and learned about property tax relief.

It's all part of Green Street's racial justice plan to give reparations to Black residents in Germantown — work it hopes will spread to congregations citywide. Before the pandemic, members became aware of just how much money Green Street had in unrestricted reserves, and they wanted to put those funds to good use. The meeting dates to the 1800s, so "we have old money," said Gabbreell James, a Green Street member for 15 years who is on its reparations committee.

Green Street owns almost an entire city block, and members leave money and stock to the meeting when they die, she said. That includes a gift more than half a century ago of shares in what later became GlaxoSmithKline from a daughter of one of the founders.

The congregation plans to spend $50,000 per year on reparations work over the next 10 years. In the future, it might tackle issues such as mental health, food insecurity, or lack of resources in schools. But its reparations committee, led by Black members, is starting by helping Black Germantown residents stay in their homes. Because of generations of discriminatory housing and economic policies, Black families are less likely to own homes than white families, and they have much less wealth as a whole.

James, a regional housing coordinator for Self-Determination Housing of Pennsylvania, an organization that advocates for affordable and accessible housing for people with disabilities, said the foundation of many Philadelphians' problems is housing instability.