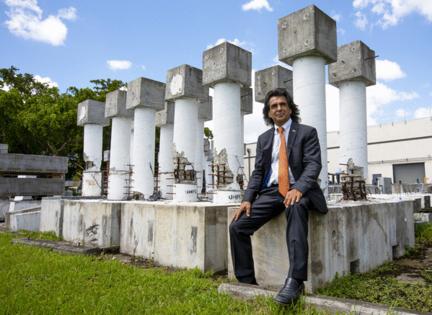 Unlike many diseases that afflict aging humans, there are already cures for the most common, serious and expensive threat to thousands of aging buildings along Florida’s coast, a malady that structural engineers have dubbed “concrete cancer.”

The symptoms show up first as rust-stained columns or cracked balconies — tell-tale signs the steel reinforcement inside them is corroding. It’s a slow but relentless process that can be super-fueled by salty sea air and tidal flooding.

Today’s high-rises are constructed with tougher codes and better waterproofing than decades-old condominiums like the collapsed Champlain Towers South in Surfside, Fla. But some research engineers believe there are even better ways to build along the beach with improved materials that can resist or even eliminate corrosion — such as rustproof polymer reinforcing rods and ultra high performance concrete that is largely impervious to saltwater. They’re already in use in some specialty construction, most notably in seawalls, bridges and public projects, but the broader building industry lags behind.

One reason, said Morteza Khatib, a structural engineer who earned a doctoral degree studying sustainable concrete science at the University of Miami, is the same one that controls many business decisions in the construction industry — money.

Polymer bars, for instance, might increase upfront material costs by around 20 percent and cut into profit margins for contractors and developers. On the flip side, Khatib said, it could save condo buyers millions over a building’s lifetime by dramatically reducing repair costs. Similarly, ultra-high performance concrete can range from five to 20 times more expensive than normal concrete, but less of it is typically needed and it also eliminates most long-term maintenance costs.

“Ask anyone with a condo facing the ocean,” he said. “The balconies are constantly getting repaired. The reason: corrosion. And then they just put more steel back in, and patch it with concrete. Why? Just spend a bit more and double its lifespan [with non-corrodible rebars]. There are so many people in academia that know this, but almost no one outside it does.”

RUST IS AN EXPENSIVE ENEMY

Champlain Towers was a flawed design from the start, a recent Miami Herald investigation found, constructed with columns too narrow to accommodate the steel reinforcement called for in plans and codes. It’s not yet clear how or if corrosion of that steel played a role in the catastrophic and deadly collapse in Surfside, but the unprecedented failure has set off a frenzy of structural inspections by building officials across South Florida and almost certainly has kept many condo owners up at night worrying about cracked columns and rusty stains in the downstairs garage.

While that’s understandable, many experts in South Florida and elsewhere stress that they consider the Surfside collapse a tragic anomaly likely caused by a combination of factors. They don’t believe it suggests there will be a sudden surge of similar failures.

“Most old concrete buildings in this country, even ones from the ‘70s, are completely reliable,” said Michael Kreger, Drummond Endowed Chair in Civil Engineering at the University of Alabama.