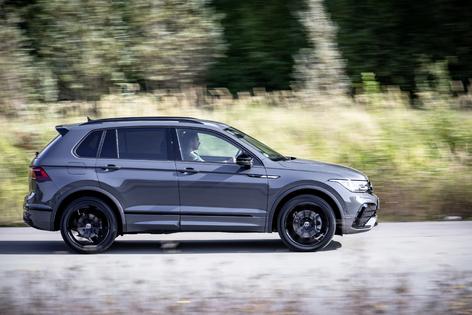 The stiffest competition for Volkswagen's bestselling Tiguan may be ... another VW. That one being the VW introduced last year as the newest VW:

It is smaller than the Tiggy by about 10 inches in length. But it has almost the same inches in terms of first- and second-row legroom. It also has about the same total space -- for cargo.

But it doesn't offer a third row, which comes standard in the Tiggy. That (plus a stronger standard engine) may make the latter worth the price for those who need the additional seats -- and want the extra power.

You also get some other things that either cost extra in the Taos or aren't available in that model.

The Tiguan is VW's compact-size crossover, distinct from the subcompact Taos, which slots in underneath it in size as well as price -- and seats.

Chrysler, the luxury division of Dodge, is down to just two models on offer. One of them may not be around for very much longer.

That model is the Chrysler 300 sedan, and once it's gone, there won't be very much left of ...Read More

There is a boundary layer of iridium above which there are no dinosaur bones to be found -- because the dinosaurs were killed off by whatever laid down that worldwide layer of iridium separating the last era of the ...Read More

The question begs several answers, all of them depending on ...Read More

A measure of the sea changes in the new car market is that even in the $100,000 luxury car market, a V8 engine, at the very least, is no longer a given.

In fact, that kind of money no longer buys more than a six in most ...Read More