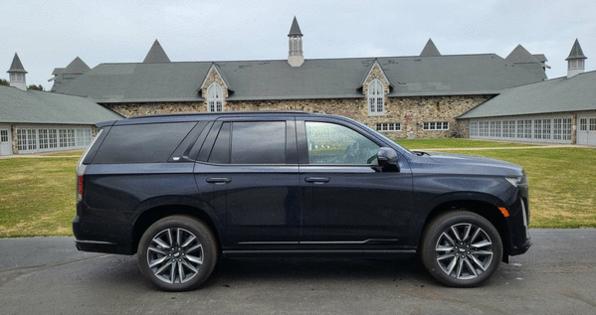 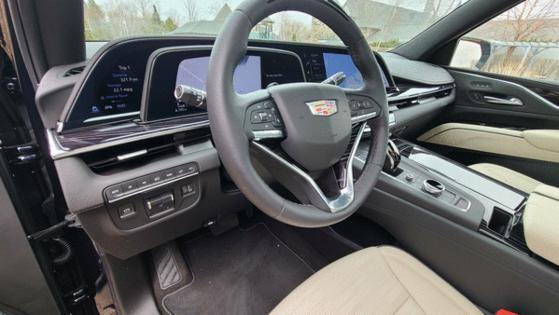 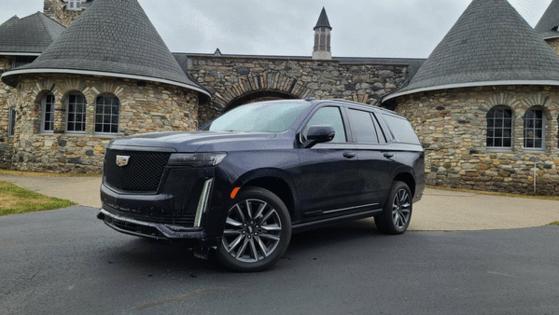 CHARLEVOIX, Michigan — Like a Great Lakes passenger ship, the bow of my Cadillac Escalade cut through the fog of an April snow shower. Sure-footed, diesel-powered, on autopilot to our port of call.

On a long round trip Up North to scope out my son’s summer wedding venue at Castle Farms, the Escalade showed why it is the King of Mega-utes. Parked in front of Castle Farm’s magnificent Queen’s Court turrets, the jet-black chariot bears the stuff of royalty: Cadillac family crest on the imposing chain-mail grille, big silver wheels like a knight’s shield, glowing front-and-rear horizontal running lamps like medieval torches.

My Sport model is equipped with black trim — in contrast to the Caddy’s signature chrome — which gives the great figure an added sense of menace. Behold, the Dark Knight.

Unlike knights of old, however, there is little clatter from the chassis. Once upon a time, you knew a diesel from its CLACKETY-CLACK-CLACK engine idle. Not Escalade. The Caddy’s twin-turbo, 3.0-liter inline-6 is the same as the new generation of Duramax diesels that power GM’s sibling Chevy Silverado and GMC Sierra trucks. It purrs like a resting lion.

My family descends from their seats, air suspension lowering the cab and running boards extending before their feet like a royal welcome.

Castle Farms was built by Sears president Albert Loeb in 1918 as a grand country estate on a 1,600-acre farm. The house echoes a European castle with turrets, grand hall and archways. It fell into disrepair over the course of the 20th century — a curious ruin like so many European castles. Successful Domino’s Pizza franchisee Richard Mueller and his wife Susan resurrected it as a passion project in 2000. Today it is a bustling tourist attraction complete with train rides, wine tastings, art collections and weddings.

Escalade, too, has resurrected the Cadillac brand.

In disrepair after an uninspired close to the 20th century, Caddy engineers did yeomen’s work to rebuild the brand as an athletic competitor to European performance makes with the CTS, ATS and V-series sedan hellions. But it’s the magnificent Escalade that has restored Cadillac’s luxury luster — paving the way for its transition to a regal, all-electric brand in the mold of 1950s Cadillac ocean liners.

That luxury is best demonstrated by Super Cruise, the semi-autonomous driver-assist system that leaves (most) driving to the car.

Along secondary roads, I drove hands-on — adaptive cruise control maintaining regulation speed since, ahem, my lead foot gets heavy in this nimble giant. But upon entering I-75, I toggled the additional lane-keep icon on my steering wheel and — like a robotic chauffeur — the Escalade took over the driving duties from me.

At a discussion Tuesday with media, analysts projected 14.4 million sales this year, below ...Read More