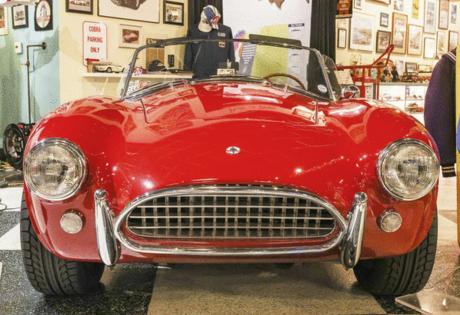 Spielman has one of San Diego's most admired collections, a rotating cast that currently includes a 1923 fire engine, a 1934 Packard, a 1964 Shelby Cobra, a handful of vintage Corvettes and about two-dozen others.

"Some people specialize when it comes to cars," Spielman said. "I like a little bit of everything."

His museum will be featured this weekend as the car-collecting world again turns its eyes to San Diego for the 16th annual La Jolla Concours d'Elegance.

The three-day luxury event is best-known for its Sunday display of 150 jaw-dropping automobiles parked on the grassy cliffs overlooking La Jolla Cove. But it also includes a Saturday morning tour — already sold out — in which people tool around San Diego in their classic cars and stop to gawk at several private collections.

Spielman's 30,000 square-foot facility is the first stop on the tour, bright and early. If past years are any indication, it won't be hard to get people to show up. (About 200 are expected.) It will be hard getting them to leave.

At age 79, Spielman understands the pull of what he calls "artwork in motion." He's bought and sold hundreds of collectible cars, following his own sense of style, nostalgia and history. The vehicles aren't always old; his current stable includes a 2022 Corvette and a 2021 Porsche.

He drives them all, often on weekends when there's less traffic kicking up rocks that chip windshields and ding paint jobs.

Imagine being on vacation with friends at a lake house, packing up to go home, lots of chaos with adults and children, vehicles moving in the driveway, luggage strewn about, and suddenly realizing you do not know where ...Read More

ENCINITAS, California — Toyota pioneered the green auto segment 20 years ago with its egg-shaped Prius, expanding its customer base from Camry shoppers, Tacoma off-roaders and Supra speedsters to include hybrid tree-...Read More

With the price of regular unleaded gasoline still in the $4-a-gallon range, the comparative price of premium is kind of a bargain at many stations.

When the price of regular surged this spring, the percentage ...Read More