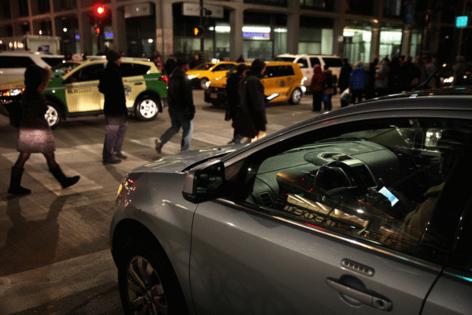 As part of their response to a yearslong rise in highway deaths, national and state organizations are taking aim at distracted driving, hoping to reduce what one official called "a plague on our roads."

Distracted driving, which literally means anything that takes a driver's attention away from the road, can range from talking or texting on the phone to head-banging to music on the car radio, goofing around with friends, eating, using headphones or applying makeup.

The results can be deadly: The National Highway Traffic Safety Administration says deaths resulting from distracted driving have been increasing for the past decade and reported 3,142 people died that way in 2020, making up about 8.1% of traffic deaths.

Another 420,000 Americans were injured in accidents involving distracted drivers.

"Distracted driving is one of the fastest growing traffic safety threats," Theresa Podguski, director of legislative affairs for AAA East Central, said in a news release. "Any distraction, whether it's texting or talking to a passenger, takes a motorist's attention away from the road and can have dangerous consequences."

Reducing distracted driving is a key element of the federal Department of Transportation's National Roadway Safety Strategy. Transportation Secretary Pete Buttigieg announced the strategy earlier this year after traffic deaths increased at record levels the past two years, despite reduced driving during the peak of the COVID-19 pandemic.

As a result, organizations are stepping up efforts to encourage drivers to keep their attention on the road with a special emphasis during April, which is Distracted Driving Awareness Month.

For example, the Governors Highway Safety Association announced it is teaming with General Motors on what it calls "an action-oriented, recommendation-rich report" to teach drivers not to distract themselves. Once the report is issued this summer, the association will offer competitive grants to State Highway Safety Offices to implement programs.

"Look around and you'll see distracted drivers everywhere — it's a safety epidemic," GHSA Executive Director Jonathan Adkins said in a news release. "This unique collaboration will shine a light on this problem and help advance one of the core principles outlined in the U.S. Department of Transportation's National Roadway Safety Strategy, which calls for safer people by encouraging safer behaviors. Making attentive driving the norm will benefit everyone on the road."

Using a cellphone while driving probably is the most common distraction. A pair of opinion polls by Advocates for Road and Highway Safety in the past few months show how difficult the problem may be to solve.

In another move to make sure it has what it needs to electrify its lineup, General Motors Co. said Thursday it entered into a supply agreement with MP Materials Corp. for the alloy and magnets needed for EV programs.

JOSHUA TREE NATIONAL PARK, California — At 4,200 feet above sea level here in the arid Mojave desert, not much survives. The landscape is raw, rocky, brown. Except for the enduring Joshua Tree. As if taken from the pages...Read More

Tesla Inc. reported better-than-expected first-quarter results, buoyed by strong demand for its electric vehicles, but warned of supply-chain challenges for the rest of the year.

Q: President Joe Biden recently announced an expansion of the use of ethanol added gasoline. Any benefits or drawbacks? It is usually a few cents cheaper, but I wonder if I get as good mileage with the blend.

The maker of Chrysler, Jeep, Dodge and Ram on Tuesday said it has halted production of commercial vans at its plant in Russia.

Stellantis NV has suspended the manufacturing operations at the plant in Kaluga more than ...Read More