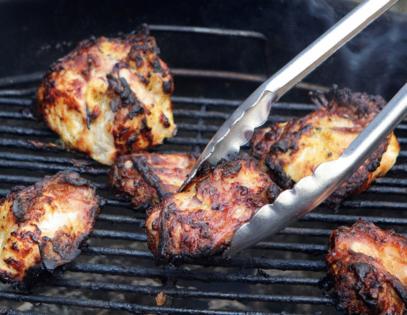 The first of these is a day of somber reflection and of profound thanks to the hundreds of thousands of Americans who gave their lives so our country could be free.

And the second of these is a day of fun, of relaxation — and of grilling.

Memorial Day stands as the unofficial beginning of the summer, a time when school is (normally) over and vacations (normally) begin.

It's a three-day weekend, the first of the year for some of us. We celebrate by heading outdoors for food and drink. In other words, it's time to fire up the grill.

For this year's holiday, I put my grill to the test with five recipes. Well, four and a half.

The half-recipe is for grilled pita chips, and it is so easy that it does not qualify as a full recipe. You just brush pita wedges with olive oil and grill both sides for a couple of minutes.

I even took the optional step of sprinkling them with sesame seeds before grilling, but honestly I couldn't tell the difference.

What you get are pieces of pita that are crisp and toasty, with a hint of the flavor of a campfire. It's pita, only better.

As it happens, grilled pita chips go especially well with my next dish, grilled eggplant dip. It's a specialty from Trinidad, a way of cooking called choka. In a choka, you first fire-roast the vegetable — or fish — and then grind it up with aromatics and other flavorful ingredients.

In this case, I pushed slivers of garlic into the eggplants and grilled them until the vegetables were done. Then I coarsely blended it all with yogurt, lemon juice, ginger and more to make a dip I like better, frankly, than the more familiar baba ghanoush.

Then it was time to grill meat. I made one of my favorite grilled recipes, a dish I realize now (from looking at the date on the recipe) that I have been making for 20 years.

It's easy to see why. The dish crams a lot of flavor into a relatively small amount of meat. Then you slice the meat thin and serve it on tortillas, though it would go just as well on top of a salad.

The recipe is from Bobby Flay, the guru of grilling. It is a Korean-style beef, marinated for a half-hour in lots of good Asian ingredients — soy sauce, sake (or dry sherry), garlic, ginger and more.

The meat used is skirt steak, though flank steak would work with as much success. They are both beefy-tasting cuts that take marinades very well. In the wrong hands they can be a little tough to chew, but nothing is better when you cook them right and slice them thin.

For my next grilled meat, I turned to the other guru of grilling, Steven Raichlen. I have long been a fan of marinating chicken in yogurt and Indian spices overnight before grilling it, so I decided to make what he calls Sea Captain's Chicken Tikka — so named because he got the recipe from a Pakistani captain of a ship.

The yogurt marinade is flavored with garlic, cardamom, ginger, lemon juice, and black and cayenne peppers. I allowed my chicken to sit in it for a full 12 hours before grilling it over indirect heat.

Raichlen, incidentally, recommends grilling it over direct heat, but I've never had success doing that. The exterior of the chicken burns while the part closest to the bone remains dangerously undercooked. So it is always indirect heat for my chicken.

The yogurt keeps the chicken moist while also tempering the other ingredients. The result is a tender, juicy and subtly flavored dish you'll want to add to your grilling repertoire.

I have baked bread on a grill before with considerable success, but I had never made the famous Indian bread naan on a grill — and it's a natural. Naan is traditionally cooked on the side of a tandoor oven, a clay oven that gets to 900 degrees.

The best you can do in a home oven is 500 degrees Fahrenheit, or maybe 550 degrees. But a grill will top 600 degrees and can get you close to 700 degrees, so it is a better bet for naan.

I made a very simple version, using nothing more than flour, baking powder, salt, water and an egg, plus butter for brushing after it was baked. Other recipes use yeast and yogurt and milk, but I like the simplicity of the one I made. And you can't beat the taste.

It is a very simple, very plain bread — but it also tastes faintly of fire and smoke. And as with all grilled food, that is what makes the difference.

2. Set up grill for direct heating and preheat to medium-high.

3. Arrange pita wedges on the hot grate and grill, turning with tongs, until they are nicely browned, 1 to 2 minutes per side. Don’t take your eyes off the grill for a second; grilled pita burns very quickly.

4. Cool in a single layer; the wedges will crisp as they cool.

Recipe from “The Barbecue! Bible,” by Steven Raichlen

2 long, slender eggplants, about 2 pounds in all

8 cloves garlic, peeled and cut lengthwise in half

1. Using the tip of a paring knife, make 8 small slits in each eggplant. Insert a half clove of garlic in each slit.

2. Set up the grill for direct grilling and preheat to high.

3. When ready to cook, place the eggplants on the hot grate and grill, turning with tongs, until the skin is charred all over and the flesh is very soft, 20 to 30 minutes. The eggplants will have lost their firm shape. Transfer to a plate to cool.

4. Cut the stem end off the eggplants. Then, using a paring knife, scrape off the charred skin. Transfer the eggplant flesh, with its garlic, to a medium-size bowl and mash to a coarse puree with a fork or puree it in a food processor. Stir in the yogurt, cilantro, scallions, coriander, ginger, lemon juice and oil. Season with salt and pepper to taste. Serve immediately; grilled pita chips go particularly well with this dip.

Recipe from “The Barbecue! Bible,” by Steven Raichlen

1. Preheat grill. Combine sugar, soy sauce, sake, garlic, scallions, ginger and sesame oil in a flat dish. Add the steak and coat well with the marinade. Let marinate at room temperature for 30 minutes, turning once. Remove meat from marinade, sprinkle with salt and pepper, and grill on each side for 2 to 3 minutes for medium rare. Remove from grill, cover and let rest 5 minutes.

2. Meanwhile, place the tortillas on the grill one at a time; heat for 45 seconds to 1 minute, then flip and heat the other side. Slice meat thinly against the grain and serve in warm flour tortillas.

Recipe by Bobby Flay, via the Food Network

Note: This recipe requires a marination time of 6 to 12 hours.

1. Rinse the chicken pieces under cold running water and remove and discard the skin. Drain and blot dry the chicken with paper towels. Place the chicken pieces in a large nonreactive bowl. Sprinkle 1 teaspoon salt over the chicken and toss to mix. Let stand for 5 minutes. Be sure to thoroughly clean the sink with plenty of soap and hot water.

2. Meanwhile, crush the cardamom pods in a mortar with a pestle, then add the garlic and ginger and pound to a coarse paste. If you don’t have a mortar and pestle, combine all these ingredients in a mini chopper or spice mill and process to a coarse paste.

3. Transfer the cardamom mixture to a small bowl and stir in the yogurt, lemon juice, black pepper and cayenne. Season the marinade with salt to taste. If desired, stir in enough food coloring to create the desired tint. Pour the marinade over the chicken and turn the pieces to coat. Let the chicken marinate in the refrigerator, covered, for 6 to 12 hours; the longer the better.

4. Set up the grill for indirect heat, and preheat to medium-high.

5. Brush and oil the grill grate. Arrange the chicken pieces away from the flames or hot coals. Cover and cook until done, about 45 minutes, depending on the size of the pieces.

6. Transfer to a platter and serve topped with the sliced onions.

Adapted from “The Barbecue! Bible” by Steven Raichlen

When I go to a Mexican restaurant, you can be ...Read More

Almost half of older adults — more than 26 million people 65 and older — have prediabetes, according to the Centers for Disease Control and Prevention. How concerned should they be?

Almost half of older adults — more than 26 million people 65 and older — have prediabetes, according to the Centers for Disease Control and Prevention. How concerned should they be?

DALLAS -- Twice a month, you can find Eric Kolb at the memory support center at the Villagio Senior Living facility in Carrollton, Texas. He sets up a TV and microphone while he greets residents gathering in the common ...Read More