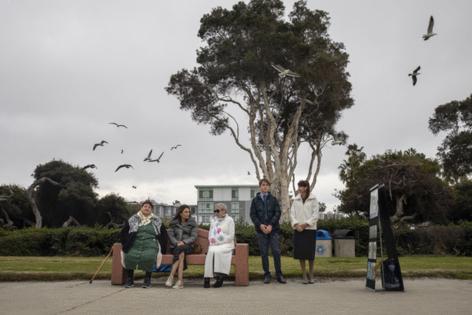 She and her 72-year-old mother had just won asylum because of the religious persecution they experienced as Jehovah’s Witnesses in their home country of Russia. She maintained her composure in the courtroom, but inside, she was elated, knowing her life was safe.

“When he finally said he was granting asylum, I was overwhelmed with joy,” Ponomareva, 48, recalled, speaking through a Russian interpreter.

She and her mother soon left the courtroom to tell the news to their friends who were in the waiting room — Anna Ermak, who fled with Ponomareva and whose asylum case is still pending, and Alex Voloshanovskiy, who is part of the same Russian-speaking Jehovah’s Witness congregation in Encinitas.

“I felt that joy,” Ermak said in Russian. “I was also overwhelmed with joy.”

Ermak, 40, is hopeful that this means she, her husband and two children will also win protection in the United States. After the hearing, the two families celebrated in their shared home in Escondido with a dinner of Russian dumplings.

Ponomareva and Ermak fled Russia together in 2021 after they were charged with extremism for talking about the Bible with a neighbor during a private study session. The neighbor had recorded them and reported them to the police. They made it as far as the nearby country of Georgia with Ermak’s baby Konstantin before waiting for the rest of their families to join them.

Russia banned Jehovah’s Witnesses from practicing their religion in 2017. About 100 were being held in prison there as of October 2022, and hundreds more had been charged and arrested, according to the U.S. Commission on International Religious Freedom.

After Ponomareva and Ermak left the country, they were sentenced in absentia, Ponomareva to five years and Ermak to four years and six months — according to documents in their asylum cases.

Fellow Jehovah’s Witnesses, aware of the danger they faced, helped them all along their journey.