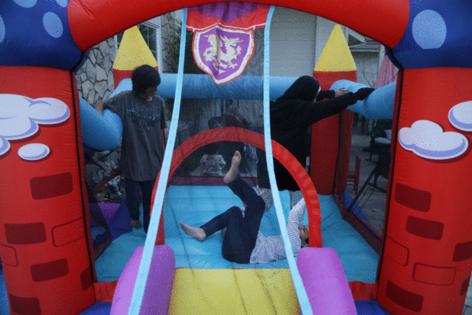 LOS ANGELES -- Muslim children typically aren't expected to fast during Ramadan until they reach puberty. But often kids will want to start earlier because they see everyone else abstaining from food and water from sunrise to sunset — followed by their community gathering to break their fast together — and they want to participate.

"I really wanted to get in on the fun," said Raahim Sattar, who started fasting when he was around 7. He's an 18-year-old Danville, California, native currently learning Arabic at the Qalam seminary in Dallas. He has older twin brothers — and a competitive streak: "I was like, hey, maybe I can do it better than them."

Fatima Amawi, a 16-year-old Muslim Youth of North America volunteer from Orlando, Florida, remembers getting a special cake during the Eid celebration after completing her first full fast at age 9.

Years later, she still finds Ramadan fasting manageable. She drinks a cup of milk each day before the fast, because she grew up seeing her grandfather do that. She takes a break from her competitive horseback riding.

"In this day and age, there are a lot of things that can really take your mind off of hunger," she said. "I just read a book or watch a TV show."

In some ways, it's easier for kids to fast because they haven't built up as many bad habits, said Ussma Ghani, dietitian and holistic nutritionist at Nutriacs. They don't have coffee addictions. They have endless amounts of energy. They're also less bound to social norms, so if they are tired, they'll just lie down anywhere and sleep.

But once kids get older, they often have to juggle their religious obligations with academics, extracurricular activities and other social pressures. In Muslim countries — or Islamic schools in the U.S. — entire schedules shift to accommodate Ramadan. But the holy month can be trickier to navigate in settings where peers and others may not understand Islam.

The Times talked to youths, parents, teachers and health experts to gather advice on how to support school-age children during Ramadan.

Fasting for the first time

"It's honestly up to the kids and up to the family what they want to do," said Aisha Aslam, the acting principal of Orange Crescent School, a private school founded by the Islamic Society of Orange County.