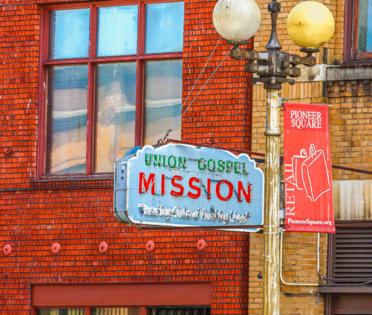 SEATTLE — The U.S. Supreme Court announced Monday that it will not review a case involving Seattle's Union Gospel Mission, which was sued in 2017 over its anti-LGBTQ+ hiring policy after it declined to hire a bisexual lawyer who applied for a job.

Justice Samuel Alito and Justice Clarence Thomas agreed with the decision not to hear the case at this stage. But according to The Associated Press, they said that "the day may soon come" when the court needs to confront the issue the case presents.

The Seattle-based Christian organization filed a petition in August 2021, asking the Supreme Court to decide a case in which the Washington Supreme Court ruled in favor of the plaintiff, attorney Matt Woods, in March 2021.

"Lately seeing all kinds of anti-trans bills passing around the country and protections for queer people being threatened," Woods said, "it was a big relief to see today that the Washington Supreme Court's decision protecting LGBTQ people from employment discrimination will not be challenged at the Supreme Court."

The case started in 2017 when Woods sued the Union Gospel Mission when the nonprofit refused to hire him to its free legal aid clinic after he disclosed he was in a same-sex relationship. Prior to applying for a job with the Mission, Woods had volunteered there for years. The Mission, one of the largest homeless service providers in the Seattle area, argued that the state's anti-discrimination law didn't apply because it is a religious employer.

Woods' suit claimed that the position doing front-line social services work in the organization's legal aid clinic was protected by state anti-discrimination law. The Mission argued the opposite: that its legal aid work — which helps low-income and homeless clients with everything from getting IDs to dealing with court fines — was inseparable from its mission to preach the gospel.

When the case was first brought before a court, a King County Superior Court judge agreed with the Mission, dismissing Woods' lawsuit.

But in March of last year, the Washington Supreme Court overturned the King County decision, moving Woods' case back to the lower court.

The Washington Supreme Court's ruling questioned whether the state's religious-employer exemption from Washington's anti-discrimination law applied to a staff attorney position at a legal aid clinic.