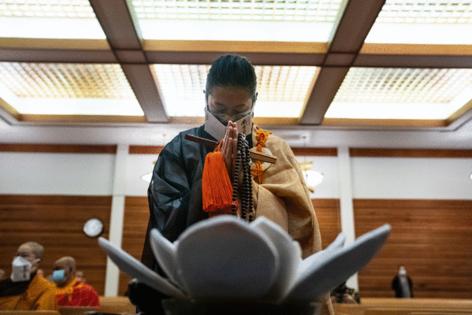 Accompanied by the chanting of the Heart Sutra in Korean, they dipped a paintbrush into a bowl of golden lacquer to gently fill in the cracks of a white ceramic lotus that had been handmade for the occasion.

The ritual, which took place last May, was drenched in meaning. The lotus flower represented the purity and potential of the Buddha's awakening. The repairing of the cracked ceramic lotus, a Japanese art known as kintsugi, was a symbol of the collective effort to heal the wounds of religious bigotry.

Here, just 49 days after the March 16, 2021, killing of eight people in an Atlanta-area shooting rampage, including six women of Asian descent, was a symbolic effort to turn brokenness into beauty.

The timing was also significant: The 49th day after death represents the end of the bardo, an intermediate stage between life and rebirth in some Buddhist traditions.

The ceremony was part of May We Gather, a historic event that drew together followers of every major school of Buddhism for what is believed to have been the first time since the tradition was founded 2,500 years ago.

May We Gather served another purpose: helping to jump-start a conversation among a diverse population of Buddhists about how leaders and institutions can respond to the anti-Asian violence that has long been part of American history, and which has been exacerbated by the pandemic over the last two years.

"So much of what has happened after the event is the acknowledgment that there is this shared experience, and that we have all, in different ways, confronted racism and white supremacy in America," said Nalika Gajaweera, a research anthropologist at the Center for Religion and Civic Culture at USC. "We may not respond in a coherent voice, but we're having a conversation."

Scholars say the history of anti-Asian violence in the United States has long been intertwined with anti-Buddhist sentiment. As a non-Christian faith, it was considered heathen, pagan and anti-American when it was introduced to the United States by Chinese laborers in the 1850s.