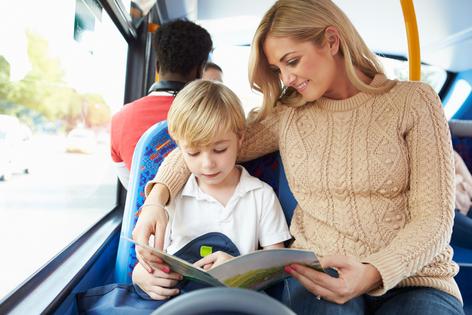 Dear Amy: Our seventh-grade son, "Wally," rides his bicycle each day about a mile to a local train station, where he catches a train to his middle school. He enjoys the independence, freedom, and responsibility of his commute.

Last year, the mother of a classmate who lives nearby asked if her son, "Eddie," could join Wally on the commute. My wife and I agreed.

We think Eddie is an exceedingly polite and affable young man and would seem to be an ideal commuting partner.

Our son, however, complains daily about having to share his commute with this boy, whom he describes as behaving differently when away from adults. Eddie doesn't seem aggressive or unsafe, but he seems to annoy our son, who is now threatening to quit his daily commute via public transportation.

We would consider making up an excuse to have Wally bow out of the arrangement, but Eddie's mother is a bit of a "helicopter parent" and probably wouldn't allow her son to ride alone.

We'd hate to spoil the other boy's use of public transportation, and we'd also feel bad backing out of the deal with his mother, whom we both like.

Do you see a solution?

-- In a Commuting Quandary

Dear Quandary: Let's recap: Last year, you agreed to let "Wally" commute by himself to school. He felt free, capable, and responsible. He rose to the occasion.

Then you cooked up a deal with "Eddie's" mom to share this commute.

Dear Amy: I am struggling with the fact my husband's family refuses to get vaccinated. These unvaccinated family members are also traveling across multiple state lines right before the holidays.

Dear Amy: Am I racist?

A couple of teenagers were at my front door, and I shouted to my husband: "Hey, there are some Black kids at the door, and I don't have time to deal with them."

Kids at the door in my neighborhood ...Read More

Dear Amy: My wife and I got married right after college and quickly welcomed our first child.

I knew that having kids would take all of my wife’s attention, therefore, I did not want any more children.

Dear Amy: I am a 56-year-old woman. When I was growing up, my father had an affair with “Sarah,” our next-door neighbor. This affair lasted for many years.

Everyone knew about it — at least everyone in my family ...Read More