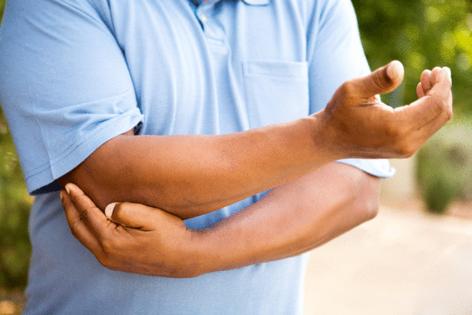 DEAR MAYO CLINIC: I have a 2-year-old daughter who loves to swing in between my husband and me as we walk. But a friend told me that wasn't safe because she could develop nursemaid's elbow. Can you explain the condition?

ANSWER: Sometimes all it takes to cause nursemaid's elbow is a little tug, such as when you're helping toddlers down a step, pulling them back from a dangerous situation or playing by swinging them by their arms or hands. The next thing you know, they're holding their arm close to their side and not wanting to use or bend it due to pain.

The term nursemaid's elbow harks back to the days when a nursemaid or nanny was common. A better name today might be babysitter's elbow. It's also known as radial head subluxation and happens when the annular ligament in the elbow is displaced by being pulled. Because a young child's bones and muscles are still developing, it can take little force to cause nursemaid's elbow.

It's a common injury for children ages 1 to 4, but it typically happens from birth up to 7 years old. The elbow is the joint most often dislocated in children.

Here's how the elbow works. It's made up of the upper arm bone, or humerus, and the two bones in the forearm, the radius and ulna. On the inner and outer sides of the elbow, strong ligaments hold the elbow joint together and work to prevent dislocation.

The elbow has two joints:

• The humeroulnar, which is positioned between the ulna and humerus, and allows the elbow to bend.

• The radiocapitellar, which is made up of the radius and part of the humerus. This joint allows for rotation of the forearm so the hand can be turned palm up or palm down. It's this joint that's involved in nursemaid's elbow.

Nursemaid's elbow occurs when the radiocapitellar joint partially separates. Even a mild force on the joint may cause it to shift, or sublux, especially in young children whose ligaments — the strong tissues that attach bones to each other — aren't fully formed.

Diagnosing nursemaid's elbow is made by a physical exam, so it's important to call your child's health care team if you suspect an injury. Be mindful that each child may experience symptoms differently, so your child might not have pain. Instead, your child may refuse to move the arm or appear to have lost the ability to move it.

Typically, X-rays aren't needed, and treatment for nursemaid's elbow can proceed quickly. The health care professional holds the child's wrist or forearm, and turns the hand so that it faces palm up. While putting pressure near the top of the radius bone with his or her thumb, the health care professional will slowly and gently bend the elbow. A faint pop or click may be heard when the joint goes back into place. This treatment rapidly relieves discomfort and restores arm movement. Surgery is seldom required, unless a fracture or dislocation isn't treated quickly.

The annular ligament that surrounds the radius may be particularly loose in some young children. So once a child has had nursemaid's elbow, it can happen again. That's why it's important to avoid swinging, tugging or pulling children by the hands or arms. Instead, try grasping and lifting them under their armpits. — Sara O'Kelly , Emergency Medicine, Mayo Clinic Health System, Menomonie, Wisconsin