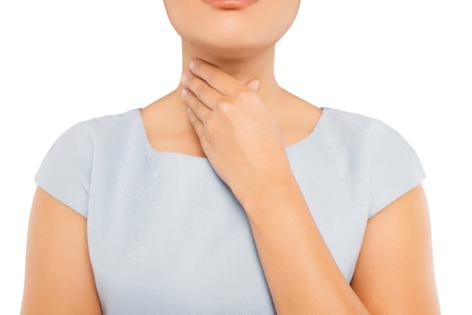 Head and neck cancers account for nearly 4% of all cancers in the U.S., according to the National Cancer Institute. These cancers are more than twice as common among men as women, and are diagnosed more often among people over 50.

Among the many types of head and neck cancers are these four:

This is a rare type of cancer that begins in the upper portion of the nasal cavity. The area where esthesioneuroblastoma begins is separated from the brain by a bone that contains tiny holes that allow the nerves that control the sense of smell to pass through. Esthesioneuroblastoma also is called olfactory neuroblastoma.

Signs and symptoms of esthesioneuroblastoma include loss of sense of smell, frequent nosebleeds and difficulty breathing through the nostrils as the tumor grows.

Lip cancer can occur anywhere along the upper or lower lip, but it's most common on the lower lip. Risk factors include excessive sun exposure and tobacco use, particularly pipe smoking. You can reduce your risk of lip cancer by protecting your face from the sun with a hat or sunblock, and by quitting smoking.

Signs and symptoms of lip cancer include a flat or slightly raised whitish discoloration of the lip; a sore on the lip that won't heal; and tingling, pain or numbness of the lips or the skin around the mouth.

Nasal and paranasal tumors are abnormal growths that begin in and around the passageway within your nose. Risk factors include smoking and being around people who are smoking, air pollution and long-term exposure to chemicals and irritants, and HPV infection.

Signs and symptoms of nasal and paranasal tumors include difficulty breathing through the nose, loss of sense of smell, nosebleeds, and facial swelling or pain.

Throat cancer can develop in the throat or voice box. Risk factors include tobacco use; excessive alcohol use; and viral infections, including HPV and Epstein-Barr virus.

Signs and symptoms of throat cancer include a cough; changes in the voice, such as hoarseness or not speaking clearly; difficulty swallowing; and ear or throat pain.