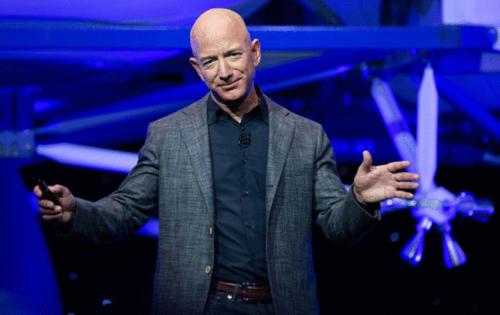 Amazon has already come under fire for how its uses biometric data, things like fingerprints and facial images. It's been accused of collecting and using individuals' images without their consent as well as violating state laws that prohibit companies from profiting off individuals' biometric data.

Usually, legal actions are targeting the company. This time, shareholder Stephen Nelson's lawsuit is aimed at Amazon's top decision makers, on behalf of the company itself.

The group of defendants — which includes executives like founder and Executive Chairman Bezos; CEO Jassy; Chief Financial Officer Brian Olsavsky; and General Counsel David Zapolsky, as well as all 11 members of the board of directors — knowingly allowed Amazon to make false statements about its use of biometric data, Nelson alleges in the lawsuit filed in a U.S. District Court in Seattle in April. Company higher-ups, his attorneys claim, "made a conscious choice to turn a blind eye to Amazon's conduct."

Amazon executives and board members "caused substantial financial and reputational harm to Amazon," the lawsuit reads.

Amazon did not return requests for comment on the lawsuit.

Amazon, like many tech companies, uses biometric data to offer customers the features they've come to expect. Its Alexa virtual assistant uses voice recognition to answer user questions about the weather. A new feature for the Echo Show 15 device announced in September allows Alexa to use visual cues to identify an individual when they walk into view of the camera and offer a personalized to-do list, calendar and music selection.

Amazon Web Services, the cloud computing arm of the business, stores some biometric data from its customers and those customers' employees, according to the lawsuit, like fingerprints to gain access to a building, voiceprints to identify callers and face scans from gamers.

Amazon launched its facial recognition service, Rekognition, in 2016 for customers to build "powerful visual search and discovery" into applications, according to a blog post on its website. Since then, it has been used in Amazon's smart home systems, Alexa and other camera devices, and Amazon has marketed the technology to law enforcement and U.S. Immigration and Customs Enforcement.

Rekognition has raised alarm bells for activists and shareholders, who say the facial surveillance tech could "unfairly and disproportionately" target people of color. Amazon shareholders will vote on a proposal at the company's annual meeting May 25 to request a report on how Rekognition is used and marketed, and the extent to which it could violate privacy and civil rights.