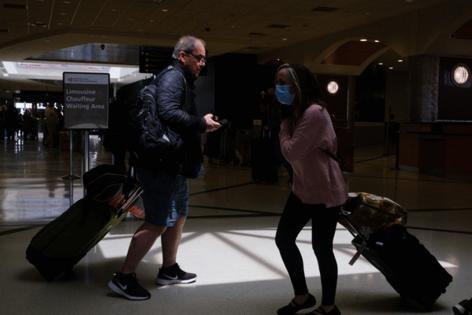 The Airline Quality Rating report released Wednesday by Wichita State University showed an increase in flight delays, bumped passengers, and baggage mishaps in 2021 compared with 2020. That came as the volume of domestic passengers sharply rebounded from a low in 2020 when the COVID-19 pandemic hit.

Airlines have been struggling to keep up with the rapid resurgence of travel and staff up quickly enough. Some have cut their flight schedules for this summer in order to make the loads more manageable.

"It could take another two or three years for airlines to address these issues," Dean Headley, a researcher and emeritus associate of marketing at Wichita State, said in a written statement. When airlines cut their payrolls in 2020 due to the drastic decline in flying amid the pandemic, some pilots retired and other airline workers took other jobs "and they aren't coming back," he said.

The only category that showed some improvement was a reduced number of complaints in 2021 compared to a surge in 2020 when airlines canceled thousands of flights and passengers struggled to get refunds.

The Airline Quality Rating draws on data from the U.S. Department of Transportation to analyze airline performance. It ranks airlines based on an index of their performance on baggage handling, consumer complaints, involuntary denied boarding and on-time arrivals.

Southwest Airlines remained the top-ranked airline in the ranking based on its 2021 performance, on par with its position in 2020. Atlanta-based Delta Air Lines retained its No. 3 spot. Other major carriers came further down in the ranking, with United Airlines in sixth and American Airlines in ninth place. Spirit Airlines came in last of the 10 carriers ranked.

The AQR report is one of a number of recent studies reflecting the state of the airline industry, along with an annual J.D. Power airline passenger satisfaction study also released this week. That study, based on a consumer survey, found that congestion and the lingering effects of the COVID-19 pandemic contributed to a decline in customer satisfaction.