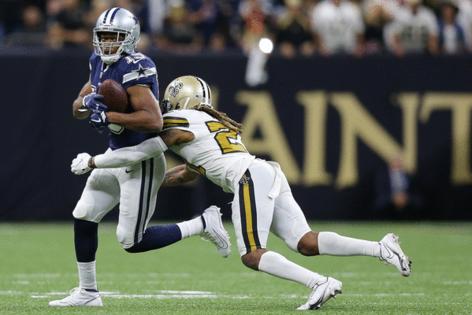 He made an immediate impact on the field in the 27-17 victory against the New Orleans Saints, despite limited playing time due to a lack of practice during his mandatory 10-day layoff.

Cooper’s 41-yard catch in the first quarter sparked the Cowboys’ first touchdown drive, and in the third quarter he drew a flag for interference call that set up a field goal. Both plays came on third down.

But Cooper sounded tone deaf after the game when he was asked about his two-game absence, which was admittedly frustrating to Cowboys owner Jerry Jones because Cooper is unvaccinated.

Instead of explaining his decision for not being vaccinated or displaying an understanding why the Cowboys owner felt getting the shot is what is asked of “team” players, Cooper compared himself to NBA legend Michael Jordan and his famous “flu game” during the 1997 NBA Finals.

“It was tough. Jordan played with the flu,” Cooper said. “That’s how I looked at it.”

Cooper even blamed the NFL’s COVID-19 protocols for his absence, saying he could have played if not for the restrictions even though lingering symptoms kept him sidelined for the first three practice days of this week. He wasn’t taken off the NFL’s COVID-19 list until Wednesday.

“It was a restriction of not being able to play with what I had,” Cooper said. “It was tough, knowing that I could physically have gone out there and played, but the restrictions didn’t allow me to do so.”

Cooper expressed an appreciation for the support of his teammates through his absence. While Jones expressed frustration, quarterback Dak Prescott and the rest of the Cowboys players publicly supported his right to make a personal choice.

“They’re my teammates,” Cooper said. “We have each other’s backs through whatever situation arises.”

Jones said Cooper’s absence, based on an individual decision to not get vaccinated, hurt the team in back-to-back losses to Kansas City Chiefs and Las Vegas Raiders.

“This is a classic case of how it can impact a team,” Jones said recently. “At the end of the day, this is a team. You cannot win anything individually. The point is, it popped us. This did pop us.”

Cooper caught two passes for 41 yards against the Saints. (His other reception gained no yards.) He played the game on a pitch count due to his conditioning, getting the majority of his reps on third down.