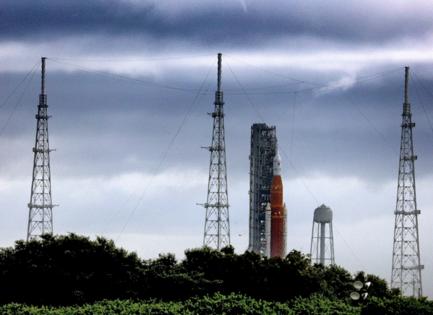 ORLANDO, Fla. — With the approach of Tropical Storm Nicole potentially targeting landfall along the Space Coast, NASA officials opted to delay any attempt to launch the Artemis I mission to the moon from Kennedy Space Center until at least Nov. 16.

The move allows for safe conditions for employees to return to work along with time to assess any damage to the Space Launch System rocket, Orion spacecraft and mobile launcher at KSC’s Launch Pad 39-B, where it will be riding out the storm, NASA stated on an update to its website.

“Adjusting the target launch date will allow the workforce to tend to the needs of their families and homes, and provide sufficient logistical time to get back into launch status following the storm,” NASA stated.

KSC moved to HURCON (Hurricane Condition) III status Tuesday, which calls for securing facilities, property and equipment on site. A “ride-out” team will remain at KSC to monitor the launch complex including the Artemis I hardware during the storm.

SLS and Orion are designed to withstand sustained winds of 85 mph at the launch pad, so NASA officials opted to keep it vertical after having rolled the $4.1 billion rocket and spacecraft to the pad last week. It had been safe at KSC’s Vehicle Assembly Building since NASA opted to avoid the threat of Hurricane Ian back in September.

“Current forecasts predict the greatest risks at the pad are high winds that are not expected to exceed the SLS design,” NASA stated. “The rocket is designed to withstand heavy rains at the launch pad and the spacecraft hatches have been secured to prevent water intrusion.”

But ahead of Nicole’s arrival, teams have powered down Orion, the SLS core stage, interim cryogenic propulsion stage and boosters. A hard cover has also been installed over the launch abort system window, while teams also secured the crew access arm on the mobile launcher and performed other safety measures.

“Teams are poised to resume work as soon as weather and Kennedy center status allows,” NASA stated. “Once back on-site, technicians will perform walkdowns and inspections at the pad to assess the status of the rocket and spacecraft as soon as practicable.”

NASA had been planning a Nov. 14 launch, but will now aim for a two-hour window that opens at 1:04 a.m. Nov. 16, but also could shoot for a backup two-hour launch window on Saturday, Nov. 19 that opens at 1:45 a.m. If it launches that Wednesday, the Orion capsule would return for a splashdown in the Pacific Ocean on Dec. 11.

Artemis I is an uncrewed flight that will launch the Orion capsule atop the SLS rocket that will produce 8.8 million pounds of thrust on liftoff, which would make it the most powerful rocket to ever launch from Earth.

Orion will then spend several weeks orbiting the moon, heading farther out than and return to Earth faster than any other previous human-rated spacecraft, with reentry speeds near 24,500 mph generating temperatures around 5,000 degrees Fahrenheit.

If all goes well, NASA can move forward with the crewed Artemis II flight set for no earlier than May 2024, which will also orbit the moon. That would then pave the way for Artemis III, which looks to return humans, including the first woman, to the lunar surface for the first time since 1972.