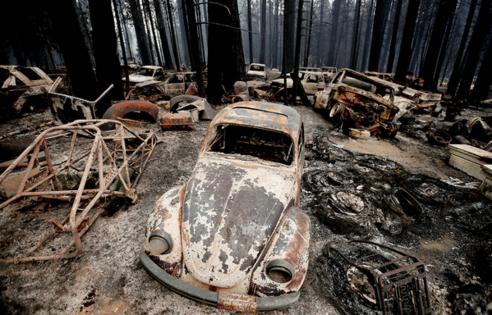 LOS ANGELES — Fire officials are breathing easier as a Pacific storm system is poised to lower the curtain on Southern California’s wildfire season, weeks after a series of October storms did the same for the rest of the state.

The agency is now forecasting that the southern portion of the state will see a reduced risk of large fires over the next couple weeks due to below-normal temperatures and near to little above-normal precipitation, which work together to hydrate vegetation.

An upper-level ridge over the Western United States that brought warm and dry conditions through November is also shifting to an upper-level trough, which brings cooler, wetter conditions, Nauslar said.

At the same time, Santa Ana wind events, which have driven some of the most damaging fires in Southern California, appear likely to take place at a below-normal frequency this winter, Nauslar said.

The weather shift, which is expected to bring rain starting Monday, will enable the California Department of Forestry and Fire Protection to evaluate and adjust preparedness levels, said Battalion Chief Jon Heggie. Some units are on schedule to reduce staffing by the end of December, either laying off seasonal workers or reorganizing personnel to focus on different projects like fuel reduction, he said.

Still, Heggie said it would be unwise to think the change will extinguish the state’s risk of large fires entirely.

“There is no end of fire season,” he said. “We have devastating fires year round in California.”

Experts had warned this fire season had the potential to be severe. The region continues to be gripped by a long-term drought. Vegetation and soils were historically dry in many areas. The Sierra Nevada snowpack, which is supposed to melt gradually in the spring and summer, was nearly gone by May. Meanwhile, climate change has sent global temperatures rising, resulting in record-breaking heat waves.