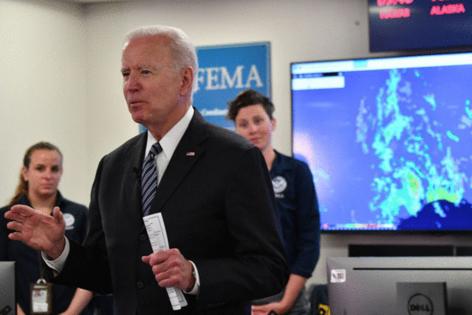 President Joe Biden on Monday announced plans to spend $1 billion more to help American communities prepare for hurricanes and other extreme weather events as experts gird for another busy summer season of storms and other natural disasters.

The move doubles funding for the Building Resilient Infrastructure and Communities program aims to help vulnerable communities get ready for the hurricane season that officially begins on June 1.

Biden announced the funding boost in a Monday visit to the Federal Emergency Management Agency’s headquarters, where he was briefed on preparation for the impending surge of storms.

“We’re going to spare no expense to keep Americans safe and respond to crises when they arise,” Biden said. “It’s time to get ready for the busiest time of year for disasters in America.”

The president also announced a new climate data system by NASA to help track the worsening effects of climate change.

The coming storm season is likely to be worse than average but not so bad as last year’s historic record of 30 named storms.

“I’m going to insist on nothing less than readiness for these challenges,” Biden added.

The National Oceanic and Atmospheric Administration said last week that the hurricane season, which runs from June through November, will likely see 13 to 20 named storms, including at least six that will become hurricanes and three to five categorized as major hurricanes with winds of more than 110 mph.

This year has already had significant winter storms that caused a deadly blackout in Texas and other states and underscore the damage caused by climate change.

In 2020, the U.S. endured 22 separate weather and climate-related disasters with losses greater than $1 billion each. The disasters, including wildfires, hurricanes and snowstorms, had a cumulative price tag of nearly $100 billion.

As climate change threatens to bring more extreme events such as increased floods, sea level rise and intensifying droughts and wildfires, the Biden administration said it is the government’s responsibility to better prepare and support communities before disasters occur, rather than simply respond afterward.