Environmental Nutrition: Pump up the iron 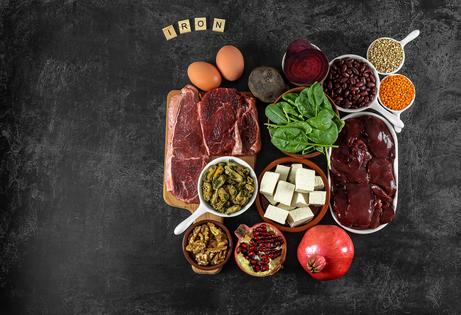 Why is iron so crucial to our bodies? “We need adequate iron to produce hemoglobin and myoglobin, an essential part of red blood cells that carries oxygen throughout the body,” says Julie Stefanski, RDN, registered dietitian nutritionist and Spokesperson for the Academy of Nutrition & Dietetics.

Stefanski says low levels of the mineral can leave you feeling physically tired and weak, impair brain function, and weaken the immune system which hinders the ability to fend off colds and other illnesses. Anemia is a condition resulting from an inefficient number of red blood cells. For those who like to work up a sweat, optimal levels of hemoglobin are important for endurance.

Iron deficiency on the rise

Knowing this, it’s concerning that recent research suggests iron deficiency is on the upswing in the U.S. A 2021 study in The Journal of Nutrition discovered that the rate of iron deficiency among Americans has been rising since 1999 as has the rates of individuals treated for severe anemia and fatalities attributed to iron deficiency anemia. Untreated long-term iron deficiency can contribute to heart disease and death from cardiovascular disease.

Why the shortfall? The researchers attribute this largely to a drop in iron intake: a 9.5% decrease in females and a 6.6% decrease in males between 1999 and 2018. During the nearly two-decade study period, average beef intake decreased while there was a rise in chicken consumption which provides less iron. Also, using USDA nutrition numbers from dozens of foods, it was determined that there was a drop in iron levels in 62% of both animal and plant-based foods analyzed which might be the result of changes in agricultural practices.

And as more people switch to plant-based eating, Stefanski says the risk for poor iron status may rise — “the form of iron in plants is not as bioavailable to us as is the iron in animal-based foods, and certain natural parts of plants known as phytates and tannins can bind with iron and limit how much is absorbed by the body.”

According to the National Institutes of Health, vegetarians and vegans require consuming about twice the amount of iron per day to meet their needs. One other reason you may be low on iron is that your body’s demand for it may have increased. This often occurs in pregnant women, and people who lose blood through blood donation, intestinal conditions, or menstruation. According to the World Health Organization, about one-third of all women of reproductive age in the world are anemic. “If a person has a digestive disease such as celiac disease or bacterial overgrowth, poor iron absorption and anemia can result,” Stefanski adds.

Get what you need

The Institute of Medicine of the National Academy of Sciences recommends that men aged 19-50 consume eight milligrams (mg) of iron per day and premenopausal women consume 18 mg of iron per day. After menopause, women’s iron needs drop to the same level as men’s: eight mg per day.

The body cannot make iron; you must acquire it through your diet or supplementation. Since red blood cells have a short lifespan, the body requires a constant supply of iron to rebuild hemoglobin.