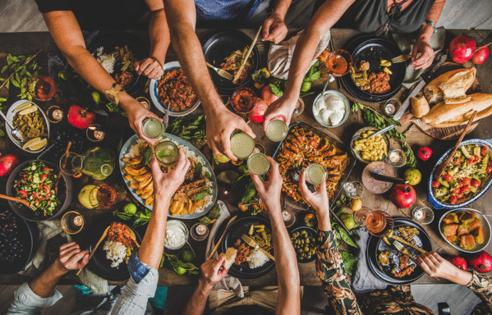 It’s amazing what a difference a new job title and 35 years can make. The first time I saw the film, my focus was entirely on the quality of the filmmaking, which was extraordinary. When I saw it again two weeks ago, I was all about the food.

The story is simple, and I remembered much of it: Two aging, unmarried sisters live on the desolate coast of northern Denmark in the late 1800s. Though they have little money, they hire a younger French woman, Babette, who is fleeing the terrors of the Franco-Prussian War. Daughters of the founder of a severe, Puritan-like sect, they spend their lives helping others.

Babette responds to their kindness with a quiet gratitude. And when she wins the French lottery, she determines to serve them and the remaining members of the sect a gourmet French feast. It’s the culinary opposite of the unpalatable gruel and ale-and-bread soup that make up their daily diet.

The first Danish film to win a best foreign-language Oscar, it came out during a glorious period of food-related movies. Made around the same time as “Tampopo” and “Eat Drink Man Woman,” “Babette’s Feast” remains my favorite of all the food movies, though “Mostly Martha” gives it a run for its money.

It isn’t just that the acting is so strong, the cinematography so evocative, the story so sensitive. It’s the food. The food is exquisite.

The final act is devoted to the preparation and especially the consumption of the feast. The first course is a turtle soup, served with a particularly fine amontillado sherry. It is followed by blinis demidoff, buckwheat pancakes loaded down with sour cream and a decadent amount of caviar, paired with vintage champagne.

Next up is the star of the meal: tiny quail stuffed with foie gras and two slices of black truffle, cooked in (and partly out of) a puff pastry shell and served with a clear brown sauce. When I saw the film in the theater and that course was served, the audience let out an audible sigh.

The remaining three courses, which are less spectacular, are shown relatively quickly. An endive salad is served and quickly eaten — it’s just endive, after all. Dessert is a rum cake with candied fruits (maybe they wanted something less rich after the other courses), followed by a course of cheese and fruit, and a final serving of coffee and cognac.

The point of the film is that the feast is a gift of love, and it transforms all who partake in it. The elderly members of the sect learn to stop their petty bickering and, perhaps more importantly, they come to realize that pleasure is not to be feared. The sisters learn that men from their past kept love for them in their hearts. And Babette understands how important it is for an artist, in this case a chef, to express herself through her art.

Put in another, more pedestrian way, the movie says that food is love. The film is a love letter from the past, reaching out from 35 years ago to wrap us in its warm, enveloping glow.

If you get the chance, see it. See it again. Come for the filmmaking, but stay for the food.

Excuse me for a minute while I suck up to my boss.

Not long ago, my editor mentioned in passing that her favorite thing to eat is shrimp and grits. Suddenly, and for reasons as mysterious as they are inexplicable, I was ...Read More

These snack cakes, which come two to a package, are a soft take on a classic treat. The chocolate cakes with a creme filling between them are reminiscent of an Oreo but taste a lot like a Hostess treat (a cupcake or maybe ...Read More

It’s peach season, and we’re gearing up to make some amazing dishes with Georgia’s signature fruit.

There’s nothing worse than having a piece of fruit turn brown. Browning doesn’t necessarily mean the food is ...Read More

Thanks to its bold, rich flavor and curative properties — tomato juice is said to counter the effects of drinking too much alcohol — a bloody mary often is the drink of choice for Sunday brunch. Yet the vodka-based ...Read More

Is it just me? Before going to sleep every night, am I the only one who goes through a seemingly endless list of the unintentional slights I have committed against other people, the mistakes I have made, the inadvertent ...Read More

Consuming just one sugary drink a day can increase a woman's chance of developing liver cancer, according to research by various institutions that was presented at the annual meeting of the American Society for Nutrition. ...Read More