THE KITCHN: A pressed sandwich to remember 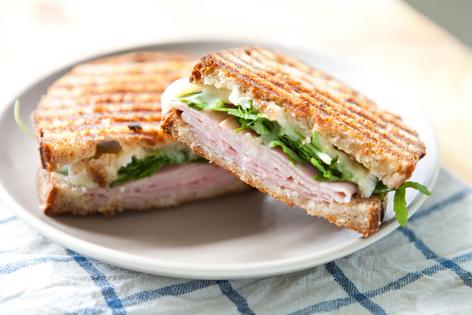 Although we've been in our current house here in Seattle over a year now, I'm still unpacking a few stray boxes from the basement. Last weekend, I unpacked an old, beloved friend: my panini press. And I got right to work preparing this heavenly new sandwich that marries tart marmalade, spicy arugula, creamy brie and little-bit-salty ham.

I am not a big appliance gal. I hate the clutter on the kitchen counters, much preferring simple food that doesn't take much gadgetry to prepare. However, when I received the panini press as a gift a few years ago, pressed sandwiches became a pretty big deal. I made them more often than I'd like to admit.

Panini presses are nice because they can transform pretty ho-hum ingredients into something that seems much fancier than it originally warranted. If you have a few leftover slices of tomato and a nub of good melting cheese, you've got a crispy delightful sandwich in minutes. That being said, you don't need any appliances to make this sandwich -- or any pressed sandwich, for that matter. You can easily cook them on the stovetop in a skillet (see separate directions below) just like you would a normal grilled cheese.

I thought of the ingredients for this particular sandwich after I took a marmalade class about a month ago and realized I had more marmalade than we could reasonably eat on breakfast toast or scones. We started spreading it on crackers and even swirling it into yogurt, but I began to think that it'd be wonderful on a sandwich with a nice, creamy cheese. And good bread and ham. And, of course, that leftover arugula that was just begging to be used. The result was a sandwich we'll make again. Often.

As is the case with most sandwich recipes, you should feel free to adapt and swap out ingredients as you wish. Spinach would be nice if you don't care for arugula. Roast turkey would be wonderful instead of ham. My boyfriend, Sam, likes his much heavier on the mustard and spreads a little soft butter on the inside. You get the picture: it's a good excuse for you to experiment when you have a few extra minutes for lunch.

2 teaspoons Dijon mustard (or more, if you prefer)

Pumpkin Spice pandemonium is upon us — and it’s not even Sept. 22.

Weeks before the first day of Autumn, a slew of food brands have announced new offerings based on the seasonal flavor profile that is beloved by some,...Read More

PHILADELPHIA — Philly empties out on summer weekends, when the Shore crowd beats a path down the Expressway. Streets are quiet, parking spots abound, and the city’s businesses brace themselves for the slow season.

With grocery prices at record highs, we’ve put together a guide for a week’s worth of healthy meals

There’s no getting around this simple and unpalatable fact: It’s pretty stressful to go grocery shopping these ...Read More

Pop-Tarts are essentially flat pies with filling. So it makes perfect sense to create an apple fritter version of them. Apple flavors with hints of cinnamon and molasses fill the inside of the pastry layer. White frosting ...Read More

We all love our snacks. They not only hold us over until our next big meal, but they also satisfy our need for crispy, crunchy, sweet and savory treats.

Too much snacking on the wrong foods, however, can lead to health ...Read More

CHICAGO — You know those hard plastic beer can holders?

I have 147 of them. I counted. They’re an array of colors — black, brown, silver, red, purple, yellow, pink, blue, three shades of green — and in mostly four...Read More