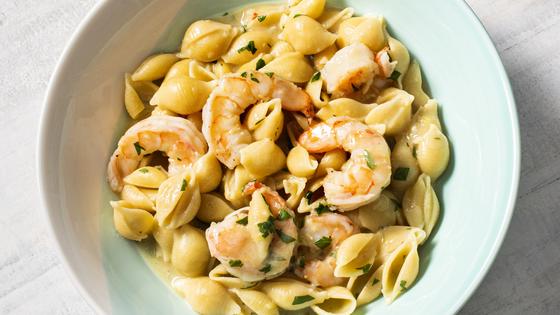 Shrimp is the most popular seafood in the United States. These slightly sweet, mild-flavored crustaceans are full of interesting science. Take a deep dive into these shrimp-ly fascinating facts.

They change color when they cook

Most raw shrimp are a gray-black color. But when you cook them, they turn pink! Why the color change? Shrimp contain a pigment called astaxanthin that is released when the shrimp reach about 120 degrees. Bonus fishy fact: Salmon have pink flesh because they eat shrimp and krill, a shrimp relative that contains the same pigment.

They come in lots of sizes

There are about 2,000 species of shrimp around the world, and humans eat around 300 of them — from common whiteleg shrimp to beautiful royal red shrimp. Some species are harvested when they’re super tiny, dried, and used in all sorts of dishes, including soups, salads, and stir-fries. On the other hand, black tiger shrimp can grow as long as 13 inches!

The shell is full of flavor

Shrimp shells contain proteins, sugars and compounds called glutamates and nucleotides, which have a savory umami taste. If you cook shrimp shells, their proteins and sugars undergo a special chemical reaction that gives them even more flavor. But peeling shrimp is a LOT of work! In this recipe, we use peeled shrimp and add another ocean ingredient — clam juice — to boost this dish’s salty seafood flavor.

Cooking whole carrots requires only a tiny bit of prep (just peel and go!), but they take longer to cook through than smaller chopped carrots, especially on their thicker ends.

If you roast whole carrots uncovered, the ...Read More

One key to flaky, tender scones is the ingredients you use, but another is the temperature of those ingredients. Using chilled butter — and mixing everything together quickly, before it warms up — helps create those ...Read More

Instead of a sundae, serve this ice cream pie for dessert. You can use whatever flavor of ice cream you want and even add your favorite sundae toppings, too! You can even make this sweet treat up to a week in advance if ...Read More

If you think oatmeal comes in a packet, think again. They know about oatmeal in Ireland and Scotland, where whole-grain, steel-cut oats are popular. Yes, these slightly chewy oats take longer to cook than old-fashioned ...Read More

For this recipe we wanted a drinkable frozen treat like Del’s Frozen Lemonade. We found that the best way to create a slushy frozen drink texture was to freeze half of our limeade mixture in ice cube trays and then blend...Read More