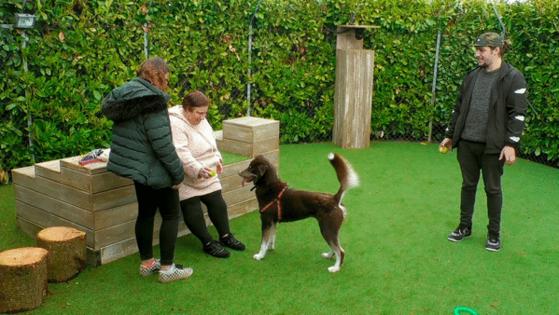 Bored dogs tend to destroy furniture or shoes or pretty much anything they can get their paws on. Most of humanity may be burned out by the daily grind, but dogs actually like to work, and the docuseries “Dogs with Extraordinary Jobs” offers a look at the varied ways they contribute to human lives beyond companionship.

In the show, which premiered Wednesday on the Smithsonian Channel, these are brief portraits at best. The format is almost numbingly straightforward in its news magazine approach, but give me a show that has “dog” in the title and I’ll probably watch it. Each episode is narrated by British dog trainer Victoria Stilwell (best known in the U.S. as host of the Animal Planet series “It’s Me or the Dog”), and the dogs featured here all have that pleasantly expectant “You rang?” air about them. Of course they’re here to help. They want to help. They’re happy to help.

A Great Dane named George belongs to a 13-year-old girl named Bella, who was born with Morquio syndrome. The condition limits her mobility, and this is where George’s size — specifically his height — comes into play: They walk side by side, him stabilizing her, which allows Bella to get around without the use of crutches or a wheelchair.

They met at a service dog training center, where she was volunteering. “I’m an animal person, so I liked all of the dogs — but none of them liked me.” She’s philosophical about it. “It’s ‘cause of my voice. It’s high-pitched. So to them, it’s like really high-pitched.” When she would enter the kennel, the dogs would run outside and leave. But George stayed. And for the last three years, they’ve been inseparable.

In South Africa, herons and other birds like to congregate in the fields abutting airport runways, and border collies Troy and Buzz are used to chase them off — picture a dog galloping and barking its head off — in an effort to prevent dangerous collisions with the engines of planes landing or taking off. In England, a chocolate Lab named Fernie is the classroom dog for elementary school students, and there’s a quietly fascinating moment when the teacher demonstrates that Fernie can actually read certain words. (I appreciate that the show calls this what it is: a dog trick.) The teacher holds up a piece of paper with the word “sit” on it. Fernie sits. Another with the word “down,” and Fernie goes down. “Roll over,” same thing. How does this even work? “Fernie can recognize the shapes of words,” the teacher explains. “So in the same way that children become more accomplished readers — they don’t have to sound out every letter, they can just look at a word and they know what that word looks like — it’s exactly the same. He has learned to associate a shape of a word with a meaning.”

Gracie the Bark Ranger has her own Instagram account, and her primary role is wildlife ranger at Glacier National Park in Montana. She’s the personal dog of natural resources program manager Mark Biel, and her job more or less consists of staring intently at goats or other wildlife that have strayed too close to the parking lot or other areas where humans are around. “She looks cute and fuzzy to us,” says Biel, “but to the sheep or the goats, she looks like a wolflike thing with big teeth that wants to eat it …. (They) see that and they move pretty easily. And then what we’ve found is that they tend to stay out of the area we just moved them from for a longer period of time.”

There’s no such thing as too much dog content, and I’m surprised we haven’t seen streaming platforms getting in on this action beyond the occasional show, a couple of which are returning next week. The second season of the Netflix docuseries “Dogs” premieres July 7 (the streamer has asked critics to not write about it until closer to the premiere) and “The Dog House: UK,” a reality show that takes place at a dog rescue in the English countryside, premieres July 8 on HBO Max.

“The Dog House” is gentle, easy viewing, even if some of the potential adopters are occasionally too needy, or disappointed when a dog fails to greet them with unbridled joy. Shelter dogs are allowed to be tentative or unsure at first; it doesn’t mean there’s anything wrong with them, and the staff do their best to get that message across. As a group, the employees are incredibly thoughtful when it comes to finding the right match for both human and canine. They watch the meet-and-greets with a careful eye, cringing when there’s no spark and cheering when the chemistry is obvious. The environment at the rescue is less chaotic and stressful than what you typically see in the United States (which may or may not be a construct for the cameras), but you can tell a lot of thought has been put into the experience itself: The outdoor pen where the introductions take place has fake turf and a shrubbery enclosure that makes the space feel cozy and quiet and private.

The show captures the essence of each dog’s personality, but it also has an observant, occasionally wry way with telling its human stories, as well. When asked what she wants in a dog, a recently widowed grandmother replies: “I don’t want a small one; I don’t want a big one. I don’t want a puppy; I don’t want a very elderly dog. I can’t really see the fun in having a dog that chases balls all the time. I don’t want one with issues, or any medical issues either.” OK! “Basically she wants a perfect little dog,” deadpans one of the shelter workers.

Another staffer watches a mother and son instantly bond with a Westie named Norman and says, “OK, job done.” But most meetings are more complicated. A sweet Saluki who only needs a little time and patience to work through her nervous fear is rejected (the injustice of it!), whereas a salt-and-pepper terrier does the rejecting herself, howling to be retrieved by her handler. No one is going to be universally liked, be they dog or human. It’s OK. That’s part of life. There’s a good deal of tenderness in the way “The Dog House” handles disappointment.

And once that happens, that pet can become the glue that holds a family together.

PHILADELPHIA — Any cat lover who has watched an allergic friend react to a beloved pet knows the dark powers that lurk in that luxurious feline fur. Within minutes, an allergic human exposed to a cat can begin sneezing ...Read More

SURFSIDE, Fla. — In escaping the collapse of Sunrise's Champlain Towers South, some residents had to do what they never imagined they would do — left pets behind.

And, now that the rest of the apartment building will ...Read More

(UPI) A dog who went missing in Florida was reunited with his owner 7 years later when he ended up at an animal shelter in Michigan.

PHILADELPHIA — Any cat lover who has watched an allergic friend react to a beloved pet knows the dark powers that lurk in that luxurious feline fur. Within minutes, an allergic human exposed to a cat can begin sneezing ...Read More

(UPI) Authorities in Georgia said they are trying to locate a loose African serval after the large cat woke a sleeping woman by jumping onto her bed.

Kristine Frank said she was asleep at her home in the Historic ...Read More

Fireworks, barbecues and outdoor fun go hand in hand with Independence Day, but the loud noises and change in routine can upset our four-legged friends. According to AKC Reunite, the American Kennel Club’s pet ID and ...Read More