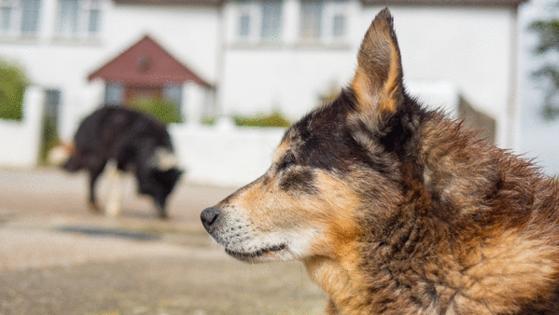 The friendly Australian Shepherd mix, later renamed Cricket, was found as a stray and brought to the shelter.

Because of her age, 8 years old, Cricket would most likely not land at the top of many people's list for adoption.

Rescue groups and shelters say older cats and dogs are usually the hardest to place because most people want younger pets. Older pets may be a bit grayer or not romp as much, but they can still add a lot to their owner's life.

"When I found out she was a senior, there was no way I could leave her at the shelter," said Gallagher, a pharmacist. Cricket was later diagnosed with arthritis, but is doing well on medication. "The biggest thing I love about her is she is so calm and doesn't require as much attention and training as a puppy. She was a ready-to-go dog. Senior dogs are so easy to incorporate into your lives, and you are giving them a safe place in their older years to be comfortable."

Karen Hirsch, public relations director for LifeLine Animal Project, said people who open their homes to older pets "just have a special place in their hearts."

Sometimes the older pets come in as strays. Perhaps they escaped, the owners felt they were too big, or they were dumped by their owners because of the expense of keeping them. Some are dropped off at the shelter because the owner has died or the owner has to move to a nursing home or assisted living facility that doesn't allow animals.

"You have to look at it as a mission that you're giving that dog a home and a second chance," said Becky Cross, director of Atlanta Lab Rescue. The rescue takes in 450 to 500 dogs annually, of which 10% to 15% would be considered seniors.

ALR reduces the $375 adoption fee by $125 for a dog at least 7 years old and waives the fee for dogs 10 and older. If there's a significant medical condition at the time of an adoption, the nonprofit will consider the dog a permanent foster and continue to pay its medical bills, said Cross.

Charlie Kleman, a retired corporate executive, is chairman of ALR's board and a volunteer who often logs hundreds of miles a day ferrying homeless dogs to the vet, kennels and foster or forever homes.

(UPI) A woman visiting a Massachusetts lake with her dog captured video when the canine picked up an unexpected passenger in the water -- a hitchhiking woodchuck.

(UPI) A family dog that went missing after being ejected during a highway crash was found days later herding sheep at an area farm.

(UPI) The crew of a Russian icebreaker ship rescued a dog from an ice field that turned out to have been lost in the Arctic for more than a week.

Yegor Agapov, the captain of the icebreaker Alexander Sannikov, said the ...Read More

(UPI) Police and the owners of an Ontario zoo are asking members of the public to keep an eye out for an escaped bobcat believed to have been released from its enclosure by a vandal.

For our dogs, spending time in a new environment such as your office can increase socialization skills and get them used to new people, smells and experiences. There is also a calming, soothing effect that dogs can have ...Read More

(UPI) A New York woman's German shepherd is being hailed as a hero by members of a church after he alerted his owner to a late-night fire at the facility.

Kim Lewis said she was awakened Sunday morning at her home in ...Read More