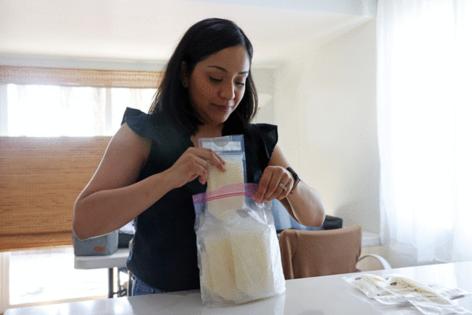 Granados didn't. But as she thought of the ongoing national formula shortage, and of babies like her 6-month-old son, Raul, going hungry, she wanted to offer what she could.

"Hello, I have breast milk to donate," the Baldwin Park mom wrote in the comments. Within minutes, requests were flooding in.

"They wanted to give me explanations of why they needed the milk," Granados said. "I was like, 'I don't even need to know that! I just want to give it to you.'"

Granados is one of thousands of lactating parents from across California who have poured in to help with the ongoing emergency. As their neighbors scramble to find formula, some nursing parents are looking to their own bodies as a source of help.

"The number of donors we're seeing has significantly increased this past week," said Jonathan Bautista, executive director of the nonprofit Mothers' Milk Bank of San Jose, the oldest human-milk bank in the country.

The state's other nonprofit bank, the University of California Health Milk Bank in San Diego, has seen a similar surge.

"We've had a fivefold increase in inquiries for donating in just the last six days," Dr. Lisa Stellwagen, the bank's executive director and a professor of pediatrics at UCSD, said Tuesday. "It's been this huge outpouring."

For millions of families, the formula shortage was already acute back in April. But the crisis exploded into the public consciousness last week, when baby-food aisles in local supermarkets and national chains such as Walmart and Target were stripped almost bare. In a Mid-City Target store on Wednesday, rainbow rows of fruit puree and veggie mush sat facing empty shelves, with little more than gallon jugs of sterile water and flats of Pedialyte where formula would normally be.

The TV landscape tends to feel pretty dismal when “Saturday Night Live” is the only sketch comedy game in town. And often that’s the case. Over its four-plus decade run, it certainly has outlasted so many others — ...Read More

PHILADELPHIA -- Karah Weiser was about to trudge on to yet another store in search of the specialty hypoallergenic baby formula her 4-month-old needs. But first she paused, took another look at the half-empty store display...Read More

For the first month, that meant mostly formula. But that formula was hard to find. ...Read More