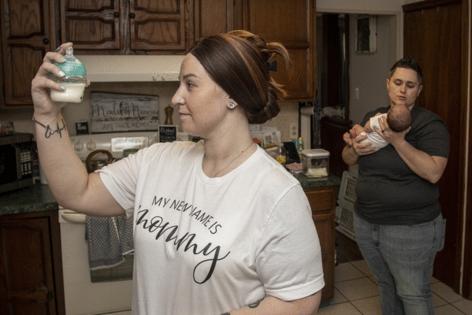 PHILADELPHIA -- Karah Weiser was about to trudge on to yet another store in search of the specialty hypoallergenic baby formula her 4-month-old needs. But first she paused, took another look at the half-empty store display, and snapped a picture.

“Boothwyn Walmart,” the 32-year-old Drexel Hill mother wrote alongside the photo she uploaded to a Facebook group she created to help caregivers track down infant formula.

A nationwide infant formula shortage has made families into scavengers, searching the internet and driving miles in search of a can of the powder or concentrate liquid to feed their child one more day. Whether by choice or necessity, families that use formula often feel isolated and ostracized for not feeding their baby breast milk, and the shortage has added exponentially to that guilt and stress. Still, Philadelphia-area families have been banding together to help each other get the food — and support — they need.

Facebook groups like Weiser’s Delco Formula Finders are flooded with pictures of store shelves with dates and addresses, while other parenting groups have become informal marketplaces to buy, sell, trade or donate unopened formula. Philadelphia lactation consultants are setting up donation boxes at libraries and shuttling supplies between clients’ homes. And lactating mothers who don’t use formula are packaging up their excess breastmilk to donate.

“Ever since I started looking for formula, it’s really shocking how much there isn’t,” said Weiser, her voice beginning to crack. For all the wild emotions, sleeplessness and stress that always come with a newborn, the thought of her baby or anyone else’s baby going without formula still demands action. “I think it’s great people are looking out for each other,” she said.

On Monday, the U.S. Food and Drug Administration said it had reached a deal with formula giant Abbott, to reopen the manufacturing plant that has been closed since February, when several infants who consumed formula made there became ill and two died. Still, Abbott said it will be several weeks before new formula hits store shelves.

Families that can afford to pay whatever it costs to get the formula they need have found success in online retailers and buy/sell/trade Facebook groups. Though, as Ashley Brown found out, these formula cans are often marked up.

Brown, 29, of Brookhaven, in Delaware County, had decided to formula-feed her baby before she was born, but didn’t want to stock up until she knew what type her baby would prefer — especially if it was a type another family needed immediately.

But when Amelia was born in April the shortage had gotten worse. Combing through a Facebook group for people buying and selling formula, Brown found a woman in Ohio selling six cans of the Costco-brand formula she needed for $200 — $60 more than it would have cost in the store, if she’d been able to get it there.

“I absolutely needed it. I said, ‘OK, fine, I guess I’m going to have to pay it so my kid can eat,” Brown said.

For the first month, that meant mostly formula. But that formula was hard to find. ...Read More