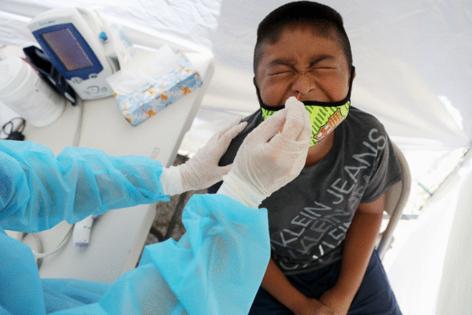 After declining from April through June, cases among U.S. children rose sharply in late July, according to the American Academy of Pediatrics and the Children’s Hospital Association, which reported 110,380 youth tested positive for the virus in the second half of the month, more than double the 43,033 cases reported in the first half.

California, though not hit as hard as other parts of the country, also saw an alarming jump: The state reported 13,757 cases in kids under age 18 in the second half of July, more than double the 4,835 reported in the first two weeks, according to George Lemp, an infectious disease epidemiologist and former director of the University of California HIV/AIDS Research Program.

“I am as worried about our children today as I have ever been,” Dr. Mark Kline, physician-in-chief at Children’s Hospital New Orleans, said at a news conference last week as Louisiana ordered everyone to resume wearing masks indoors. “There was a myth that circulated during the first year of the epidemic that children somehow were immune, but particularly now that the delta variant has emerged it has become very clear that children are being heavily impacted.”

Overall case numbers, though rising fast, are still less than a third of what they were last winter. In the two weeks from Dec. 31-Jan. 14, there were 382,545 infections among U.S. children, the AAP and CHA reported, more than three times the number reported in the most recent two-week period.

Two of the first Bay Area school districts to reopen have already reported a number of COVID-19 cases among students in the first few days of the school year.

And Christina Rogers, of Antioch, California, learned firsthand how fast the virus is spreading among youths. Her 18-year-old son got COVID-19 nine days ago, and though he quarantined in his room, he passed it on to her and her 15-year-old daughter. None of them were vaccinated.

Both kids have had a high fever, sore throats, headaches and lack of appetite, Rogers said, though her son is feeling better now. She has been hit much harder, with seven days of “an unrelenting high fever and nausea.” Though her kids will have immunity from the infection when they return to high school and college classrooms, she worries about how schools will fare against the fast-spreading virus.

“I think because more and more kids are getting sick the schools are definitely in for a rough time,” Rogers said. “It is so contagious.”

The sharpest increases in child cases have been seen in Missouri, Arkansas, Florida, Hawaii and especially Louisiana, where Kline shared horror stories this week.

One in four pregnancies end in miscarriage, according to the World Health Organization. But while there are cultural scripts for responding to pregnancy and birth, there isn't one for miscarriage. Instead, families facing ...Read More