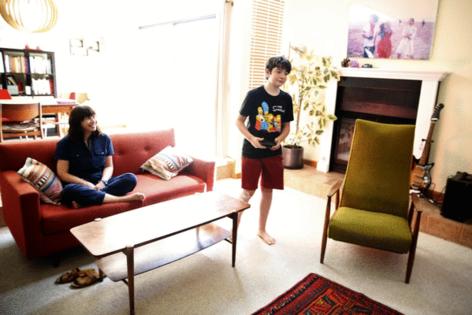 LOS ANGELES – This is the story of a journey from ignorance to understanding. It's about questioning beliefs, and radical rethinking. It's about parenthood and childhood and the pandemic.

But ultimately, it's about video games.

My 12-year-old son has always loved video games, but during the pandemic that love intensified. After hours of staring at a screen for Zoom school, he couldn't wait to open his laptop again to play "Minecraft," Roblox or "Pixel Gun 3D." At the dinner table he often reported that the best thing that happened to him that day occurred in the virtual world.

For me, computers represent work and endless social media posts. How was I even related to this kid who loved nothing more than putting on headphones and disappearing into technology? And what kind of mother was I that I was allowing him to do it?

To get him out of the house, we took walks in the evening. I'd ask if he'd heard from his friends. He'd talk about games. Did I think he should buy a military helicopter with missiles or a high-speed airplane in "Mad City"? The airplane was faster, but the helicopter would be more useful for breaking his friends out of jail.

Sometimes I let him keep talking while my mind wandered. Other times I asked if we could change the subject.

"Video games are pretty much the only thing that makes me happy right now," he said one day.

That was a gut punch. I felt I had failed as a parent.

My husband said it was normal for boys my son's age to love video games this much. I wouldn't know.

I grew up the eldest of four sisters in a house with an original Nintendo system in the den. We played "Super Mario Bros." and "Duck Hunt." The wall next to the television was pockmarked from where I threw the controller in frustration. By the time I turned 14, I'd concluded video games were not for me.

They had a wonderful Chicago doctor who talked them through a path forward. But ...Read More