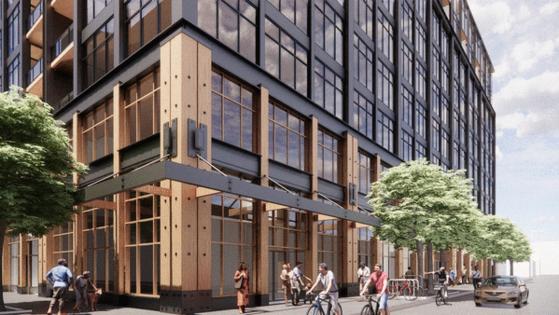 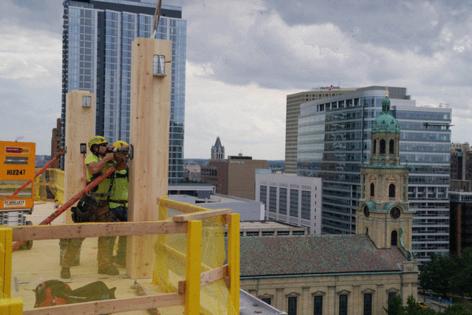 CHICAGO — Developer Sterling Bay is set to begin construction of Chicago’s first mass timber building, a nine-story, apartment tower in the Lincoln Park neighborhood. If approved by City Council, the $50 million development may kick off widespread use of the modern technique, already popular in other cities, which boosters claim is more environmentally friendly than concrete or steel and provides residents with a warmer ambience.

“This is something I’ve long aspired to do,” Sterling Bay CEO Andy Gloor said. “Hopefully, this project will lead to other mass timber buildings throughout Chicago.”

Chicago will have to play catch up with other cities. The Great Fire of 1871 left lingering worries over wood-based buildings, and a strict local code discouraged mass timber construction even as such structures began dotting the skylines of cities across Europe and North America, including Minneapolis, Atlanta and Milwaukee, where a developer just put the finishing touches on the world’s tallest building using mass timber, a 25-story, 284-foot apartment tower called Ascent.

But an overhaul of Chicago’s code began taking effect in 2020, bringing it more in line with international standards and raising hopes among advocates that local developers can finally start mass timber construction.

That would mean another weapon in the fight against climate change, according to Megan Zack, director of sustainability at Hartshorne Plunkard Architecture, which designed Sterling Bay’s proposed mass timber apartments. Producing steel and concrete emits huge amounts of carbon dioxide, but timber-based frames remove carbon from the atmosphere, an important selling point for environmentally conscious residents and office users.

“Wood is also a much lighter material, so it reduces the amount of concrete we use for the foundation,” Zack added.

The technique is much different from using 2-by-4s to construct wood frames. Mass timber builders glue wood sections together, forming thick prefabricated beams, posts and panels, usually left exposed, giving interiors the look and feel of older, loft-style buildings, and complete with openings for plumbing, electrical and other building systems.

And although some people may worry about the safety of wood-based skyscrapers, the U.S. Bureau of Alcohol, Tobacco, Firearms and Explosives, along with scientists from the U.S. Forest Service, conducted a series of fire tests in 2017, and found mass timber structures hold up as well or better than concrete or steel buildings even under extreme conditions. Researchers found mass timber surfaces would char, but the wood itself, and adhesives holding it all together, didn’t burn, allowing buildings to maintain structural integrity.

Other developers have also hatched plans for mass timber buildings in the Chicago area and will closely watch Sterling Bay’s progress as it works toward getting full city approval. Houston-based Hines, best known locally as the developer of trophy office towers such as the 835-foot Salesforce Tower, unveiled plans in 2017 for a six-story office development at 1017 W. Division St. on Chicago’s Goose Island, and later a seven-story building at Oak Brook Commons, its $500 million redevelopment of the former McDonald’s Plaza in Oak Brook.