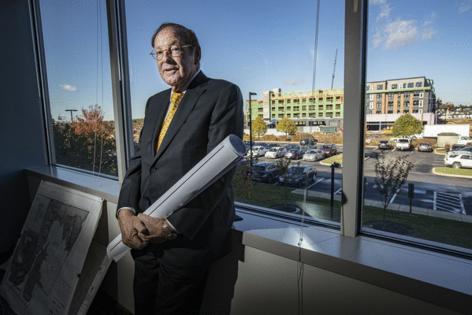 Bruce E. Toll, co-founder in 1967 of Fortune 500 homebuilder Toll Bros., has long since diversified his fortune from the Fort Washington-based firm. His firm BET Investments Inc. has bet on health care, medical, information technology and telecom companies. And in Pennsylvania he owns coal fields and auto dealers and is building hundreds of suburban apartments.

His grandfather emigrated from Ukraine in 1906. Toll says Russia's two-month-old war on that sovereign country, along with U.S. price and interest rate inflation, has changed the investing map. His answers to The Inquirer's questions have been edited for brevity and clarity.

Q: What changed this year?

A: I'm in shock over what's going on in Ukraine. I can't believe we have such a blatant war. On TV it looks like Vietnam did, when I was a kid. I never thought I'd see it in Europe.

The war in Ukraine (unavoidably) has created a lot of opportunities to start new businesses, because all the businesses in Ukraine are ruined. Volkswagen's chairman was in the news; he was saying they got a lot of parts from Ukraine, they have to find someplace else to get them.

And now Russia can't export hard coal or soft coal. Well, you know I own a large anthracite coal mine in the Tamaqua (Pennsylvania) area. Prices have escalated because of the shortage of coal.

Q: After all those campaigns against fossil fuel, demand for your coal is up?

A: Yes. Anthracite is hard coal; it is used by steel manufacturers. They are our biggest customers. And now, with the Build America infrastructure program, they'll need a lot of steel.

All those old bridges have to be widened. We have some bridges that need improvements up here in the Jenkintown (Pennsylvania) area. The state is deciding which are going to be improved now that the federal government is giving away $600 or $700 billion. Even that won't get everything done.

You know, Pennsylvania is one of the worst places for highways and bridges. So many of them haven't been touched in 50 years. I used to go down Broad Street in Philadelphia and turn on Cayuga to get on Roosevelt Boulevard, then the Schuylkill Expressway, to get into the city. Well, in 2019, they said they were closing Cayuga, to replace utilities. I called the mayor. He told me it will take four years. I told him, for the fun of it, I don't think Hoover Dam took four years.

The pandemic sent a majority of office workers home in March 2020, and many have yet to return, putting pressure on office markets across the country, including in Denver, where nearly a fourth of the leasable office space...Read More

ORLANDO, Florida — Nearly every day, Paula Kittrell gets a call, a text or a mailer with the same message: If she is thinking about selling her West Lakes home near downtown Orlando, there is someone willing to pay cash ...Read More

Q: Is it necessary to have a homeowners’ insurance policy for a condo if applying for a home equity loan? Unlike an individual house policy, don’t these policies only cover the owner’s personal property — what is "...Read More

Researchers at the Federal Reserve Bank of Dallas are concerned...Read More

As hot summer temperatures approach, the price of relief — plunging into that cool, blue swimming pool in your backyard — continues to increase.

Pool owners who depend on trichlor tablets, one of the most convenient ...Read More

PHILADELPHIA — Tyrone Seldon inherited a house from his father, who died in 2018. Since then, he and his wife, Shawn, have been trying to navigate stacks of paperwork to handle the estate on their own, because they can't...Read More