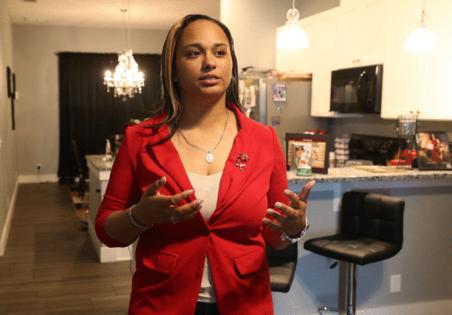 ORLANDO, Florida — Nearly every day, Paula Kittrell gets a call, a text or a mailer with the same message: If she is thinking about selling her West Lakes home near downtown Orlando, there is someone willing to pay cash today.

Occasionally, she’ll listen to the pitch. But she turns down every offer, even one for three times what she paid.

“I got three calls over the weekend,” Kittrell said. “I get a call almost every day. … Residents in our community get calls on a regular basis from people that don’t even live here.”

Stretching west from the edge of downtown, 32805 is roughly bound by Interstate 4, Mercy Drive, Colonial Drive and 33rd Street, and includes the historic Parramore and West Lakes neighborhoods, as well as Exploria Stadium and Camping World Stadium.

For decades, this section of the city was largely ignored by major corporate investors. But as downtown’s growth stretched into the area, those banking on a lucrative payout started showing up. Now, activists worry that the influx of investors and their increasingly higher cash offers will bring down homeownership rates and make the neighborhoods unaffordable to longtime residents.

“The problem with a lot of for-profit investors is just that. They’re only interested in the profit,” says Camille Reynolds Lewis, executive director of the Winter Park-based Hannibal Square Community Land Trust that is building affordable housing in 32805. “They’re not really interested in listening to families that live in the neighborhoods.”

Of the 266 homes in 32805 sold last year, 43% went to investors, according to data from realty company Redfin. By contrast, investor companies in the ZIP code made up roughly 25% of sales in 2020 and 29% in 2019, according to Orange Property Appraiser records.

Winter Park-based investor Lonnie Thompson, who did not purchase anything in 32805 last year, nevertheless understands what happened. He said the affordability and availability of homes in the ZIP code attracted the attention. “If anything was available … they just look at the numbers,” he said.