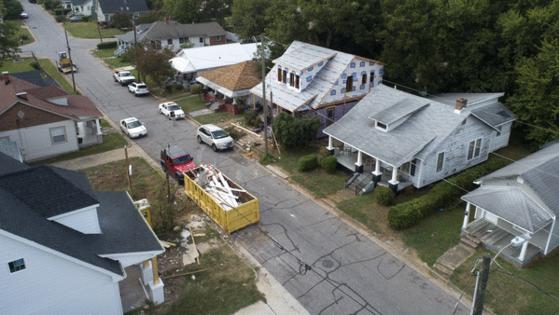 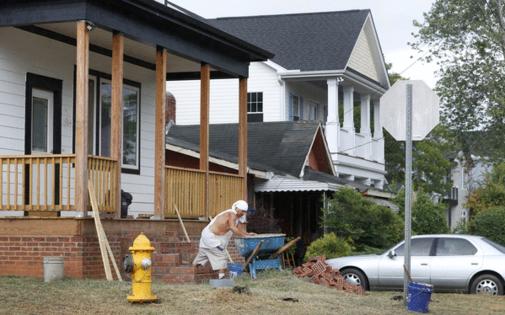 RALEIGH, N.C. — In the last three years, J.C. and Telza Perry have watched construction crews tear down seven of 14 houses on their block of East Jones Street, replacing them with towering two-story moderns that have sold for more than half a million dollars.

It stings a little.

The Perrys bought their home for $9,000 in 1968, adding granite siding and a brick garage. A school teacher, Telza Perry would empty her coin purse so neighborhood kids could buy ice cream, which made J.C. shrug his shoulders and sigh. They knew everybody on the block: doctors, bankers, train porters — all of them Black.

These days, they struggle to name all but a few holdouts from the old days. Their new neighbors, all of them white, offer a friendly wave. But it isn’t the same. Telza’s niece tried to move back to East Jones from Atlanta until the price tags chased her away. Most every day, the Perrys get calls asking them to sell their sturdy granite home, now a dwarf on the block.

“I have no problem with the size of the house,” Telza said. “I have a problem when people can’t afford to live.”

The News & Observer is examining the cost of housing across the Triangle as its median home price hit a record-high $357,000 in the first half of 2021, rising 20% in a year. In a series of stories, the N&O will show the people left behind, the disparity in rising costs and the consequences of economic and social change.

The shift on East Jones is reflected across Raleigh, where the median home value now stands at $379,000, according to Redfin — a 67% jump in the last five years. In August, Realtor.com ranked a single Raleigh ZIP code — 27616 — the fifth-hottest market in the country.

A buyer fleeing rising prices would find them just as high across much of Wake County, where the register of deeds reports the median at $365,000, up 42% in the last five years. But the stark difference between shotgun-style homes and tall moderns topping 3,000 square feet of space is most obvious in the neighborhoods hugging downtown Raleigh, many of them dating to the city’s segregated past.

Longtime residents lament the change in character of Raleigh’s College Park neighborhood, where East Jones runs near St. Augustine’s University and professors once walked the streets speaking Greek and Latin. In the last decade, the census shows the Black population dropping from 89% to 56% while the number of white residents grew fourfold.

“This neighborhood is really extinct,” said Octavia Rainey, a Southeast Raleigh activist who grew up around the corner from the Perrys. “They really erased everybody out of this neighborhood. For Black families, all you have is your memories.”

A new study by the real-estate firm Zillow found that nearly 20% of Black mortgage applications nationwide were denied in 2020, nearly twice the rate of white applications.

Many parents might be looking for money from the child tax credit payment this January but they're not going to see it arrive Jan. 15 or shortly afterwards.

What's more likely to show up is a tax letter from the Internal ...Read More

Senate Democrats on Thursday pressed Sandra Thompson, the president’s nominee to run the Federal Housing Finance Agency, on how to leverage the agency to close the racial gap in homeownership.