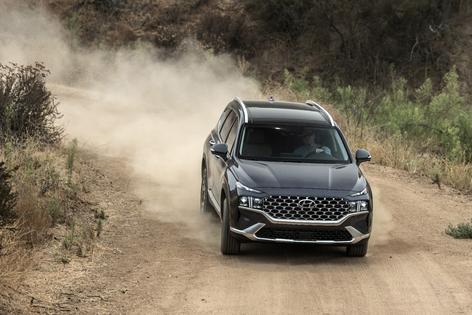 Most of them have similarly bland drivetrains -- and not much choice about the drivetrain. It comes as it is -- and that's all there is.

The Hyundai Santa Fe does a good job of not being like most of the rest. It's another crossover, yup -- but it doesn't look so much like the rest that it's hard to tell it apart. But it's what's under the hood -- or rather, what you can choose to be under the hood -- that sets the Santa Fe apart.

It is also related to its cousin, the Kia Sorento, which is slightly longer and offers a third row at the expense of some cargo-carrying capacity behind that row.

The Santa Fe (like its Kia-badged cousin) is available with either of two engines and your choice of AWD or not, with either engine -- a rare choice among crossovers in this class.

If you want more power, a turbocharged version of the 2.5-liter engine is available in the Limited and Caligraphy trims, which sticker for $38,960 and $40,960 to start, respectively.