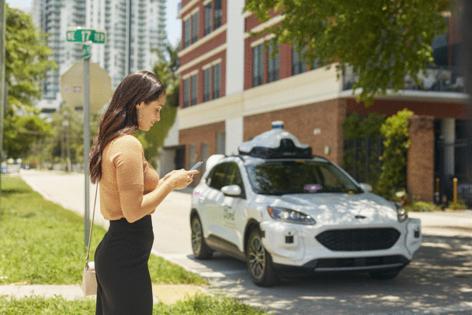 Argo AI, a robotaxi startup that has the backing of Ford Motor Co. and Volkswagen AG, said Tuesday it's launching driverless test rides in Miami and Austin, Texas.

The removal of human safety drivers is a milestone for the Pittsburgh-based autonomous vehicle technology company that was founded in 2016.

"Argo is first to go driverless in two major American cities, safely operating amongst heavy traffic, pedestrians and bicyclists in the busiest of neighborhoods," Argo founder and CEO Bryan Salesky said in a statement. "From day one, we set out to tackle the hardest miles to drive — in multiple cities — because that's where the density of customer demand is, and where our autonomy platform is developing the intelligence required to scale it into a sustainable business."

The launch of driverless operations marks the latest step forward for Argo, which also operates pilot programs with ride-sharing service Lyft and retail giant Walmart in Miami and Austin. For now, the driverless rides are not open to the public, just to Argo employees conducting the testing; the Lyft and Walmart programs will continue with human safety drivers.

The company noted that the driverless tests will be conducted in daytime traffic on public roads.

Argo, one of numerous tech startups racing to commercialize autonomous vehicle technology, is focusing on use cases for its platform in large cities, where it sees opportunities to capture some of the lucrative ride-share and delivery markets.

"Argo is able to scale because we have marshaled an extraordinary amount of data from diverse use cases and locations," Brett Browning, Argo's executive vice president of product development and chief technology officer, said in a blog post Tuesday.

"This is about creating a technology platform that enables better ride-sharing and goods delivery services – in order to improve the lives of millions," he added. "By better, we mean more affordable and accessible, safer and more enjoyable. But to achieve those objectives, we have to be a good business, and to make a good business, we need scale."

Argo's competitors include Cruise LLC, which is majority-owned by General Motors Co. and started offering the public free driverless-rides in February in San Francisco. Waymo LLC, which is owned by Google parent company Alphabet Inc., also is testing self-driving vehicles without a driver.