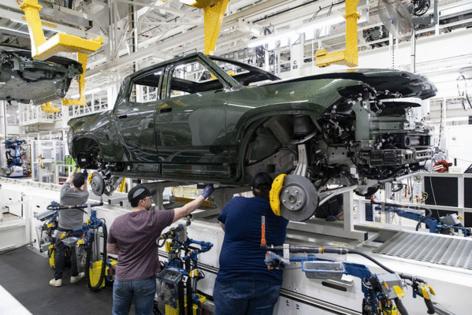 Despite production delays and market upheaval, Amazon is still counting on electric vehicle startup Rivian to help it hit ambitious climate goals and put tens of thousands of electric delivery vans on the road.

Rivian is running a lean operation: The number of vehicles it produced this quarter is almost exactly equal to the number of semiconductors it had, CEO RJ Scaringe said.

Those tight margins have been spooking investors, a panic that came to a head Tuesday when Ford announced it was selling 8 million Rivian shares, starting to cut ties with the California-based company that promised to help usher in the shift to carbon-neutral transportation. Then, on Friday, a regulatory filing revealed Ford sold an additional 7 millions shares. Ford still owns just below 10% of the company.

The announcement on Tuesday sent Rivian's stock plummeting 20%, but the drop was short-lived. It soared over the next two days, following a call with investors Wednesday where Scaringe maintained the worst of the supply-chain constraints were behind it. Rivian would start ramping up production for the rest of the year, he said, and the company has logged more than 90,000 preorders.

On Monday, news of Ford's further sale helped drive Rivian's shares down by almost 7%, with the stock closing at $24.86.

Amazon saw its investment in the company pay off at the end of 2021, when it reported a nearly $12 billion gain from Rivian's initial public offering. But it felt the fall this year, reporting a $7.6 billion loss from the investment in the first three months of 2022.

With 150 million shares and an order for 100,000 electric delivery vans, Amazon is using Rivian's vehicles to help it meet its goal of net-zero carbon emissions by 2040. So far, Rivian's turbulent stock price, driven by production delays and supply chain uncertainty, isn't any reason to question reaching that goal, researchers, analysts and company executives say.

"Rivian is an important partner for Amazon, and we are excited about the future," Amazon spokesperson Kate Scarpa said Friday. "Putting 100,000 electric delivery vehicles on the road by 2030 is no small feat, and we remain committed to working with Rivian to make it a reality."

Rivian is "primed to emerge into an EV giant," analysts from Baird Equity Research wrote in a Wednesday report, adding that the company is "blessed with talent, a clean sheet of paper, robust balance sheet and strong partner in Amazon."