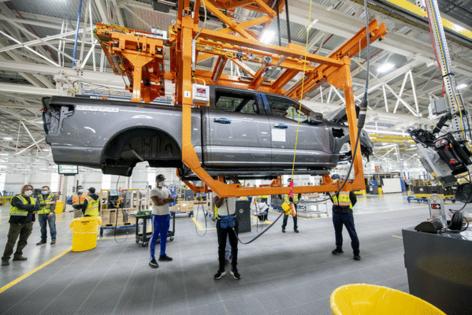 Still, Ford noted that it picked up a percentage point in U.S. market share last month as it saw its inventory flow to dealers improve. The company said during its first-quarter earnings report that the chip shortage and other supply-chain disruptions had hampered production in the first three months of the year, but that it started to see production improvements in March.

The automaker is now shipping the all-electric F-150 Lightning to dealers, though April's sales release did not include any sales figure for the truck.

Ford reported that sales of its electric vehicles increased 139% year-over-year in April on sales of the Mustang Mach-E SUV and the E-Transit cargo van. Mach-E had its best monthly sales performance since it launched at the end of 2020, up 95% year-over-year, according to Ford.

Year-to-date, Ford's sales are down 15.3% from the same period last year.

Sales of Ford's flagship truck lineup, F-Series, were down 22.3% in April, though the automaker noted that sales were up nearly 15% over March.