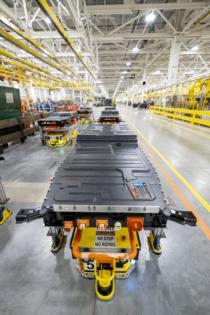 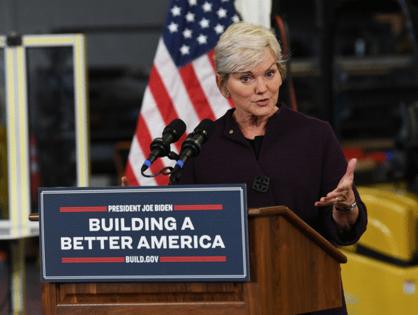 The funding, appropriated through the bipartisan infrastructure law passed last year, could go to a wide variety of domestic battery projects such as revamping factories to build batteries or mineral processing for use in batteries.

"This will help to underwrite the private investment we need in the U.S. to build reliable industrial capacity and, for the first time, have a domestic end-to-end supply chain in electric vehicles and electric vehicle production," National Economic Council director Brian Deese told reporters Monday.

The Energy Department estimates 16 to 30 projects will be funded through the grant program, depending on the applications they receive from private companies.

The announcement comes after President Joe Biden said in late March that he would use the Defense Production Act to spur production of critical battery minerals such as lithium, nickel, cobalt, graphite and manganese.

As automakers ramp up plans to produce electric vehicles, demand for those critical minerals is skyrocketing. While the U.S. does produce some of these minerals, it has little power to process them into what's needed for batteries. In comparison, China controls around 80% of critical mineral processing power around the world.

Asked how the administration can guarantee that the grant funding will go to American companies rather than other companies that are directly or indirectly owned by Chinese companies, given their domination in the market, McCarthy said projects in Michigan and Nevada could be good options for government investment.

"There are opportunities to expand innovations in supply chains in Michigan we already know are available and we can help our automakers increase demand for safer and cleaner vehicles there," she said.

Biden has said he wants half of all new vehicles sold in the U.S. to be electric by 2030 and has been pushing policies that would accelerate the transition to electric vehicles since coming into office, including directing federal agencies to buy only zero-emission light-duty vehicles by 2027 and only zero-emission vehicles fleetwide by 2035.

The problem with American luxury SUVs isn’t the lack of luxury; it’s that they don’t always go far enough. The opulence is there, but it’s particularly middlebrow, or what a middlebrow customer thinks a ...Read More

Wagner's car rolled off of a VW...Read More

A bipartisan contingent of lawmakers is pressing to give car dealerships relief from bigger tax bills they could face due to global microchip shortages that have pinched the supply of new vehicles.