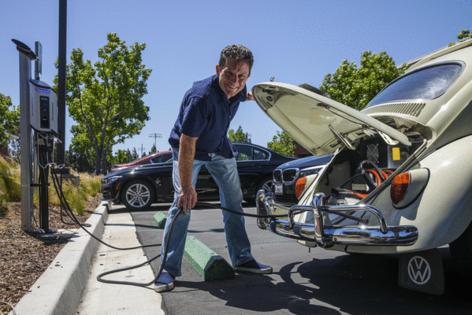 But Wagner's Bug no longer carries an upgraded, Cold War-era 40-horsepower engine and 12.5 gallon fuel tank. They've been replaced with a Curtis C-50 Brushless electric motor and part of an 85kWh battery pack scavenged from a Tesla Model S.

"People see a classic car like this pull into a charging space, it's like, 'Well, that jerk's blocking the charger,''' said Wagner, 46. "But then I open up the back, pull the charging cord and plug it in, and then it's like, 'Wait — that's electric? Can I see it?'"

With gasoline prices at nosebleed levels and concerns about climate change and pollution high, interest in electric vehicles is greater than ever based on Google search trends. But supply chain problems have led to shortages of new EVs, which has pushed up prices for used vehicles, said Mike Spagnola, chief executive of the Specialty Equipment Market Assn.

As a result, converting internal combustion engine vehicles to electric "has become more and more popular," particularly for owners of classic cars, Spagnola said. "It's a market that will continue to grow in 2022."

"These are people who love their cars and want to continue driving them, without worrying about the scarcity of parts for these older cars," Spagnola said. "It's about prolonging their longevity and, sometimes, it's about having less of an impact on the environment."

Skateboarding legend Tony Hawk can probably afford any car on the market, and he already owns a Tesla Model S and a Lucid Air, among others. But one of his favorites is the 1964 Chevy Corvette Stingray, black with a red interior, that he acquired in 2004, he said, after his retirement from skateboard competitions.

"It was the first cool-looking sports car that I saw when I was young, and it reminded me of the Batmobile," Hawk said. "I told myself that I would buy one when I got older if I could ever afford it." But lately, driving the car had become more of an exercise in frustration, so Hawk decided to turn the car electric.

"As much as I love the Mopar transmission, it was always a hassle to start and I could never drive it more than 20 miles without worrying about it breaking down," he said.

A bipartisan contingent of lawmakers is pressing to give car dealerships relief from bigger tax bills they could face due to global microchip shortages that have pinched the supply of new vehicles.

Subaru knows its people, who are among the most loyal to any automotive brand. They love their Outbacks, Foresters, Ascents and WRXs. They are also among the most environmentally conscious, dog-friendly, off-roading auto ...Read More

U.S. Sens. Gary Peters and Debbie Stabenow with 10 Democratic colleagues wrote a letter dated Wednesday to Transportation Secretary Pete Buttigieg, requesting information on the actions the department is taking for the ...Read More